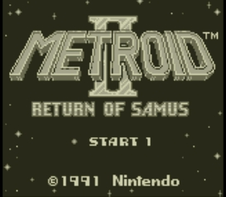 A few years after the first Metroid a sequel was released for the original Game Boy, and in my opinion it improves over the original in several ways.

The first game had a few problems: you had to use passwords to save, there was no easy way to recover health, you often couldn’t shoot enemies because you were taller than them and could only shoot straight ahead and the whole world could be confusingly labyrinthine. All of these problems are fixed. There are save spots and things you can find which will fully heal you, Samus can crouch which makes shooting things easier, and the world feels much easier to navigate (I wish it had a map, though). So, while I had to seek help on the internet while I played the first game, I got through this one without assistance.

The story this time, is that after her past experiences with the Metroids, Samus has gone to their planet of origin in order to completely wipe them out (which, to me, does sound extreme). You have to explore a huge 2D cave network in order to find and destroy all of them. What I like, is that some areas can be very atmospheric indeed. In lots of places there’s no background music and just lots of rather creepy sound effects. You’ll often find yourself worried that there’s something very dangerous nearby, and more often than not your concerns turn out to be justified. As you go onward, you collect more and more items which give Samus more powers and make it possible for you to explore other areas.

So, on the whole, it’s a sequel that does just what it should do; the old gameplay style is replicated, but improved, while at the same time adding lots of exciting new features. Graphically, despite being black and white (which actually seems to suit it, tonally) this game is also an improvement. One thing that might disappoint some people, is that things aren’t quite as open as the last game; last time, other than the final thing, you could do everything in whatever order you want, whereas this time, while still fairly open, the game does present you with much more of an order to do things in. For me, being more linear did not detract from the game, I can enjoy a linear game and a non-linear one, but it might be a shame for some.