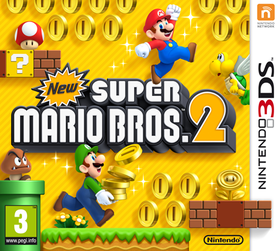 Sadly, this is the point where the New Super Mario Bros. series begins to wear a bit thin. By all means, if you’ve never played one before, you could start here and enjoy it a lot, but if you’ve played the first two and then play this one it may feel a little too same-y. Like the last two, it uses the classic 2D Mario platforming play style which has really been perfected to make it as fun as possible. But the game also reuses lots of environments from the previous two instalments and nothing really feels that fresh.

In terms of what is actually ‘new’ in this game, there’s a strange focus on money. There are coins everywhere and you have a counter that adds up your coin total after every level with the idea being that you aim to eventually get a million coins. I found this quite exciting, but it takes so long to get this many (much longer than it takes to finish the main story of the game and do the secret worlds) and so in the end I got bored of this and gave up.

There are also two money based power-ups; one is the Gold Flower which turns you into Gold Mario. I love this new item as it gives you the power to throw golden fire balls which turn things into gold. It’s probably the most powerful item you can get in Mario games and, while it is rare, I really enjoy it when it turns up. There’s also the Gold Block item which will give Mario a strange golden head and give you coins while you’re moving. I just thought it was a bit weird.

A new mode called Coin Rush has also been added which involves you rushing through three levels as quickly as you can in order to get as much money as you can. I find this mode to be pretty fun and it’s a nice way to expand the game’s life span. When you StreetPass other people, you get their Coin Rush records which you can aim to beat. For a price, you can also download new levels to play in Coin Rush mode; some of these are levels which return from past Mario games, some of them are made to be extremely hard (they’re harder than anything I’ve seen in this series before) and I think it’s nice to have the option, but it’s also annoying that you can’t just casually play them.

Overall, I do like this game, but I wish it could have had more of an identity of its own. It all feels a little repetitive, and with no Yoshi and a weaker co-op mode, it’s a bit of a step down from New Super Mario Bros. Wii too. Rating: 8.6/10