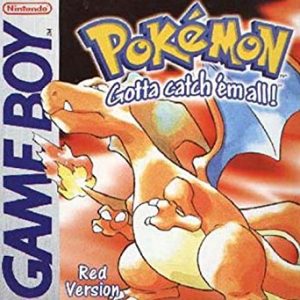 Pokémon Red and Pokémon Blue were the first two games in the Pokémon series to be released in English (there were two before them, but they weren’t much different to this). Much like every main Pokémon game, the story is that you are a young trainer who has been sent out by a professor in order to fill a Pokédex (which is done by catching every kind of available Pokémon), and to also become a Pokémon champion.

Since it’s the very first and there is a much smaller number of Pokémon, this is probably the only game in the series where you are likely to actually ‘catch ’em all’ (if you discount the impossible to catch Mew). For anybody who may not know how these basic things work: you get into RPG battles with wild Pokémon and use your own to fight and weaken them, once they were very weak, you throw a Pokéball at them to catch them, and from then on they will fight for you. You also fight against the Pokémon of other trainers, and beat your way through various gyms and then finally the Pokémon league.

The game takes place in a region called Kanto, and you’ll doubtlessly have a lot of fun exploring the world. You’ll find yourself in large forests or caves, abandoned factories, giant graveyard towers and even sailing across the sea. Of course, being a game for the original Game Boy, the graphics are not amazing, but I don’t think this is an issue. The places still look like they’re supposed to, and they all have a nice ‘atmosphere’ to them (perhaps due to the soundtrack).

On the whole, an excellent game. It has its flaws, for example sometimes it’s pretty hard to figure out what to do next and things can occasionally feel a bit slow, but they don’t make it any less wonderful. Throughout this review, I’ve referred to this game in the singular, even though Red and Blue are different games, but the differences are VERY minor and basically boil down to the selection of Pokémon available. You have to do multiplayer trades with the other game in order to get every single one (you can also battle friends). So my score for this game is 9.6/10.

(If you buy this game now, it may have trouble saving, if so, read this for a solution.)