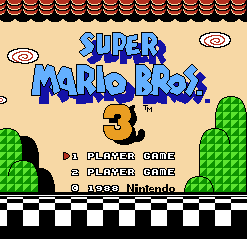 This game is the third in the original trilogy of Mario games and, by far, I think that this is the best of them. While the other two (or three) all seem a little bit dated in areas, Super Mario Bros. 3 has gameplay and even graphics that will look fine by today’s standards.

This time, Bowser is not alone in his attack on the Mushroom Kingdom and each of its seven ‘worlds’ have be conquered by one of his seven Koopalings (who may or may not be his children). So Mario must travel across and liberate all of these worlds. Sadly, Peach and Toad are not playable in this game, but it does bring back Luigi in the capacity of a multiplayer character. I’ll talk more about that later.

For the first time in the Mario series, this game gives you a world map which therefore gives you a degree of choice about what levels to do. On the map there are things like Toad Houses where Mario can collect power-ups. This time around there are more power-ups than just the Fire Flower and Super Star of the first game. Here you also have a Super Leaf (which allows you to fly), a Frog Suit (which allows you to swim and jump better), a Tanuki Suit (which allows you to fly and become a statue) and many more exciting items. You’re also given the highly useful addition that is the ability to store items, meaning that if you are already Fire Mario and you collect a Super Leaf from a Toad House, you can save that Super Leaf for use on a harder level.

But I think the best thing about this game, is that it has a much bigger variety in every area than the first two Mario games. There are so many more levels which range from caves, to deserts, to oceans, to castles, to pyramids, to rivers and so forth. There are also several very exciting air ship levels, where Mario has to make his way across an air ship covered in canons and enemies in order to reach a Koopaling. Those levels are very hard, but they’re also very fun. Plus, not only does this game feature all the enemies from the original Super Mario Bros. but it also takes a few from Super Mario Bros. 2 and adds a whole lot of brand new ones. This truly adds to the feeling of travelling across a huge area.

As mentioned above this can all be done in multiplayer too and unlike the multiplayer in the first game, turns alternate every time somebody dies or wins a level, which means that you won’t have a huge wait on your hands if you’re playing with somebody who’s really good. You also play co-operatively, so, if one level is too hard for you, your partner might win it and then you can move on. The only downside is that Luigi looks just like Mario (only wearing green) and controls just like him too, which is a shame after he was made more unique in the second game. Nicely, this also provides you with a (greatly simplified) recreation of the original Mario Bros. game.

To this day, this is one of the best Mario games and it is certainly not to be missed. Rating: 9.4/10