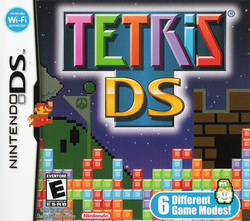 Tetris is my favourite puzzle game ever and while I generally consider the version for the original Game Boy to be the definitive edition, most other editions still have something unique to offer. I find that Tetris DS is one of the only ones which is able to rival my high opinion of the Game Boy game.

What makes Tetris DS unique is that it is themed around NES games. This means that throughout the game, you get cameos from Donkey Kong, Link, Mario, Samus and lots of other classic Nintendo heroes. Not only do you get the pleasure of seeing them in their old 8-bit forms, but virtually the entire soundtrack is made up of superb remixes of classic pieces of NES music. While you play the regular kind of Tetris on the bottom screen, you get to see scenes from various famous NES games paying out on the top; you start to look forward to what you’re going to see next.

There are other non-standard versions of Tetris available to play too; there is a ‘mission mode’ based around The Legend of Zelda where you’re asked to meet certain criteria while playing, one called ‘Catch Tetris’ based around Metroid where you control a block that moves onward through the planet Zebes (you need to collect pieces and make squares while avoiding Metroids), one called ‘Push Tetris’ based around Donkey Kong which has one player controlling pieces which fall upward while another (potentially CPU) player controls ones which fall down and other different modes too. These add some nice variation and I had fun playing them every now and then, but the majority of the time was spent paying the regular mode.

In the past, there was an online mode, which was nice, but which is not available due to the discontinuation of the Nintendo Wi Fi service. There is also a multiplayer mode which is quite fun, and, interestingly, you can use items in a way which is somewhat reminiscent of Mario Kart. Overall it’s a fun experience with lots of nice additions, but ultimately, the classic Tetris gameplay is unbeatable.