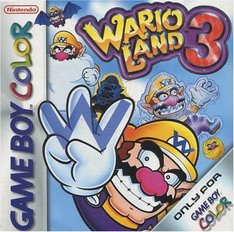 Generally, I like to play the games in a series in the order that they were released. I played Wario Land 3 after playing Wario Land II and I found it quite annoying and anyone else who plays it after the second game might well feel the same. What’s problem? Well, the last two games made a huge point of how big and strong Wario was, with him seeming to get tougher between games, only for this game to suddenly make him much weaker. Wario lacks most of the abilities he had in the last game which is very frustrating when you come across an obstacle and know exactly what needs to be done, but can’t do it because Wario has arbitrarily lost all of his abilities. You slowly get them all back as the game progresses, but it certainly hindered my enjoyment at the start.

Anyway, the game starts with Wario happily flying around in an aeroplane which he then crashes in a jungle. After the crash Wario finds a cave, in that cave is a music box which contains a tiny world; Wario finds himself pulled into that world and then is sent by a mysterious stranger to retrieve parts of another music box which will be used to banish monsters from the world of the music box. It’s an odd story, but I appreciate it for being rather unique.

Rather than having the more simple ‘one level and then the next’ progression that most games in the series have, you play one level, collect an item which will have some effect on the world map (which will open up more levels), go to some of the other levels, get more items, add to the map, return to past levels and so on. It’s very non-linear and getting through the levels actually involves a great deal of puzzle solving and it’s very far from the more normal platforming of the other games. What was very disappointing was that there was a very minimal focus on collecting coins, which is something I always associate with Wario. Also, with no real money focus, getting hit by enemies now has no real negative consequence at all.

It’s a shame that this game feels like such a step down after the first two games were really good. I think that they probably made a conscious choice to try and make the game more open and complex, and that on its own is quite a good idea, but sadly it seems like that was done at the cost of the game being less fun. The music’s quite nice though, and a few of the areas have very nice designs and are quite atmospheric… Just, on the whole, the game felt boring and bland.