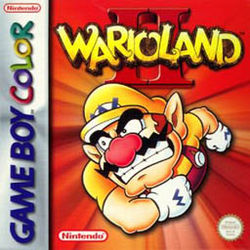 This is the second game in the Wario Land series and also the first time it became wholly distinct from the Mario series. In this game you’ll find no characters from the Mario series (unless you count Wario himself, of course) and even the gameplay is very different. While this may be a disappointment to purist fans of the core Mario series, I certainly view it as a good thing.

Story-wise, you get to see Wario relaxing the castle which he finally earned at the end of the last game. Sadly for him, however, Captain Syrup and the Black Sugar Gang want revenge after their defeat at his hands on Kitchen Island, so they ramshackle the castle and steal his gold meaning he must set out across the world to chase after them and get it back! A simple story, but it’s quite nice because it’s the end of a story that started back in Super Mario Land  and spanned five games.

The gameplay is still 2D and side scrolling, but a lot is made of the fact that Wario is really big and tough and there’s also a nice focus on exploration. Wario is actually indestructible now and being hit by enemies merely causes you to drop coins; as Wario is so greedy, you have to collect as many coins as you can to get everything in the game. Furthermore, as Wario cannot be killed, being hurt by enemies often has comical effects on him; he can be turned into a zombie, become hugely overweight, be crushed completely and other over-the-top ailments, all of which can be used to help progress through the levels.

The exploration is very appealing too; the levels are all quite interesting (modern cities, forests, trains, castles) and often have multiple exits. Indeed, this game has branching story with multiple endings! So, even once you’ve gone through the story, there’s a lot of replay value and you’ll enjoy going through the levels again to find alternate endings/exits. Plus, of course, there are secret items hidden in every level and it’s fun to find and collect them all.

So this is definitely worth a try! It’s one of the best Wario games and an all-round fun game with quite a lot of charm to it. The fact that Wario can’t die means that it’s pretty accessible too, as the levels are more about figuring how to get from point A to point B, rather than skilfully avoiding obstacles. Also to bear in mind is the fact that there is a Game Boy and Game Boy Colour version of the game, so it’s best to try and go for the colour version.