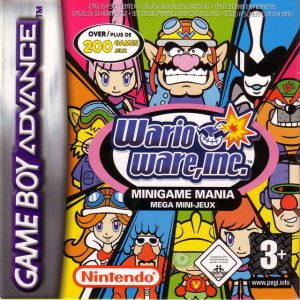 In 2003, the Wario series was well established: Wario, the anti-hero version of Mario, would find out about new treasures and head out looking for them, often ending up fighting against some evil force on the way. But in WarioWare, Inc.: Minigame Mania, the series took an enormously unexpected turn when Wario realised that starting a business (rather than treasure hunting) was the best way to get loads of money, especially when working within the video game industry… So Wario becomes a video game developer.

In order to get his new business venture going, Wario actually gets himself a completely new outfit and gets in touch with a bunch of his friends to help him. These friends are all completely new characters and all quite likeable too: there’s a young boy named 9-Volt who’s a huge Nintendo fan (very meta), a disco man named Jimmy T., an alien named Orbulon, a trendy woman named Mona with a gang of animal friends and lots of others too. The whole game is set within Diamond City and I really appreciate this completely new, urban setting, coupled with the all new cast.

So you may wonder “How do you play a game about starting up a video game development business?” and it’s the gameplay of this game which really makes it stand out. Each “level” has one of the characters going about their day and you are given random “microgames” to play as they do so – these microgames are small, five second mini games which is somehow related to the character and which need to be quickly completed: these are often really bizarre and I remember laughing about it a lot was I played the first time: you’ll do things like dodge food shaped cars, shake hands with friendly dogs, become tiny and eat cakes and it’s all a lot of fun. I was especially fond of 9-Volt’s microgames, as all of them are in some way connected to Nintendo’s past and include scenes from classic games, giving way to cameos from characters like Donkey Kong, Samus and Link. The microgames are, of course, supposed to be what makes up the game which they are all developing.

It’s a really fun game and something which I can come back to endlessly as replaying the microgames is really fun and I always want to beat my high scores. On top of all of that, it also has a fantastic soundtrack which really helps to cement the game’s urban atmosphere and makes it a real pleasure. Taking a step back, I also love how much of an absurd direction this was for the Wario series to take. A fantastic, fun-filled game.