Over the years, I’ve created lots of fictional characters who I then like to write lots of stories about. One example of these is a man named Morris. Morris is a middle-aged man with simple (but specific) pleasures. He’s a very pleasant and innocent man and I’ve written stories which have him getting involved in all sorts of outlandish situations (for example, meeting Salome Boann, the female lead in Anthony Nanson’s Deep Time.) Of all the characters I’ve created, he’s one of my favourite, so it was quite a pleasant surprise to meet him the other day.

Now I know what you’re thinking (namely, that this blog post is the conclusion of my slow descent into insanity which has been documented over the last six years) but, of course, I know that I didn’t actually meet the character – I just met someone who looked and behaved exactly as I’d always imaged Morris would do, were he real.

It happened the other day when I was walking into town to buy some dinner. I was proudly wearing the “Reading is Cool” t-shirt which I designed for myself.

“I like that logo on your t-shirt,” said a balding, slightly overweight man with a small smile. His voice was slow and gentle.

“Thank you,” I said, flattered. “I designed it myself, actually.”

“I take it you like reading then? I think more people should read.”

“What’s your favourite book, then?”

“It might be Spencer’s Mountain. A very good American book. Have you ever heard of it?” I asked.

“I take it that’s a fictional book? I don’t read much fiction,” he confessed.

“Ah,” I said. “Well, I like a lot of non-fiction too, particularly philosophy stuff.”

“I don’t read much non-fiction, either,” he said.

“What do you like to read?” I asked, somewhat confused.

“Local sports almanacs, documenting the cricket matches in Corsham and the other nearby towns and villages.”

“Well, I guess it’s nice to have your own niche,” I said and smiled.

“I hope one day you’ll be able to complete your collection.”

“Yes, so do I,” he said. “Where do you come from? I take it from your accent that you are not from these shores?”

I explained about my accent and how I live (and have always lived) in Corsham.

“And where were you born?” he asked.

“So was I, but they were expecting me to have a twin and I didn’t.”

“Well, it was fifty-seven years ago,” he said and it is quite interesting to think of all the medical advancements which have happened within single lifetimes.

“Ah, well, I was only born twenty-four years ago,” I said.

“Were you born in the RUH?” he asked.

“Yes, I was” I said, suddenly starting to feel very hungry, “but I was just on my way to get my dinner, so I am afraid I’ll have to bring our conversation to a close.”

“That’s okay. It was very nice to meet you,” he said and then give me a handshake.

It was a small and unusual interaction, but it’s the kind of thing which I enjoy. The fact that this man looked just like my character Morris, spoke just like Morris and had a strong and passionate interest in something so obscure (just like Morris) and liked talking to strangers (again, just like Morris) made it even more enjoyable. Perhaps Morris will be collecting local sports almanacs in the next story… 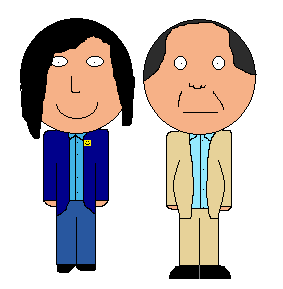 This entry was posted in Anecdotes, Writing. Bookmark the permalink.