Posted on November 20, 2013 by Adam Randall
I was on David Tubb’s blog the other day and I came across this really lovely entry which has inspired me to make a post about ten items that are of significant value to me. I’d also like to say, that being fond of physical possessions is often criticised as being materialistic and I think I agree in the case of things such as solid gold yachts and the like, but in today’s entry I’m going to talk about ten items I’m very attached to because they remind me of happy memories or of relationships with close friends and I don’t think that’s at all materialistic. Of course, I have a lot more than ten items that are very special to me, so I had to leave a lot out, so maybe I’ll make a follow up post at some point, but, anyway, here they are: 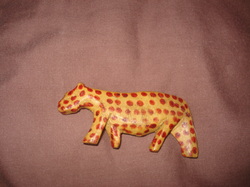 This was brought back from South Africa (I think, it may have been somewhere else) by a friend of mine and then given to me as a gift. There was a time when I was very close with this person, but now the pair of us don’t seem to have any contact. This isn’t because anything bad happened, we just went in separate directions when we went to university, but this little wooden cheetah is a fond reminder of our past friendship. 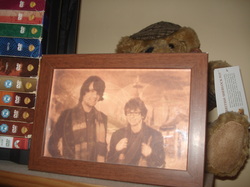 Picture of David and I

Sadly, I can’t see David quite as often as I used to, but I see this picture of he and I every single day as it sits on top of the bookshelf beside my bed. He surprised me with this picture one time when I came round for a visit, and it was a lovely treat. Even better, he has his own identical picture up at his house! You may not be able to tell from the photo, but he has also edited a picture of Gallifrey into the background, which is a nice touch. 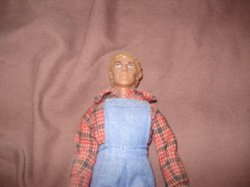 The Waltons is one of my absolute favourite television shows. Like Doctor Who, it’s one of the only things I’m always watching. As such, I was very pleased when my Mum gave me this as a surprise Christmas present last year! 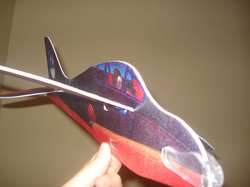 This does have a special name, but, I don’t remember what it is. At the end of the summer I got to meet my internet friend Rhinowater in real life for the first time, and it was wonderful. When I first saw him, he gave me this model aeroplane as a gift, having bought one for himself too. We did plan to have a play with them at a park, but unfortunately we didn’t get a chance to. In a way, it’s a bit bittersweet, as I may not get to see him in real life again or his sister (an old friend of mine), but primarily this reminds me of the happy time I got to spend with him. 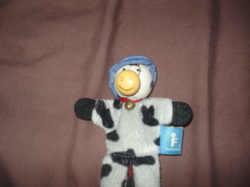 I bought Colin and wore him on my jacket as a bit of an in-joke between a couple of friends of mine. I don’t wear him so often now as he’s damaged and I don’t want to make things worse, but he still regularly appears in my webcomic, Finger Puppet Show! I wrote a bit about why I like Colin so much before. 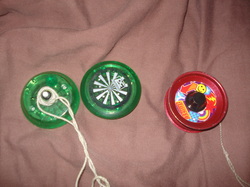 For years I really, really wanted to learn how to use a yo-yo, then last Christmas a friend of mine bought me one and taught me how to use it! Then it broke a few months later… But then they got me another one that’s still fine now! I don’t think I could ever bring myself to throw out the, broken, green one. Yoing a yo-yo is often quite therapeutic, I find. 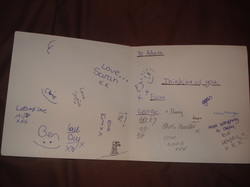 After a certain family tragedy, I was off school. Two days later two good friends of mine popped by with this absolutely amazing card signed by all of my friends. Even now, six years later, looking at it makes me happy. 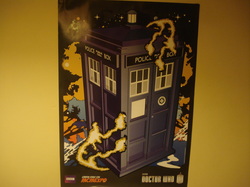 As I mentioned above, I love Doctor Who. I never really had any posters up in my room, but then one day a good friend of mine was visiting Corsham for a while and they gave me this. It was so unexpected and kind of them, so I put it up as soon as I got home. Now it’s a pleasant reminder of both one of my favourite TV shows and one of my favourite people! It’s up on the wall beside my bed. 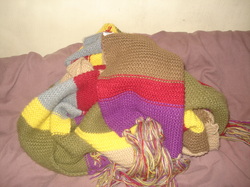 More Doctor Who! Not only is this a fantastic replica of the Fourth Doctor’s scarf, but it was a great Christmas present from a couple of friends of mine. It looks really cool and it’s really good at keeping me warm on cold days. 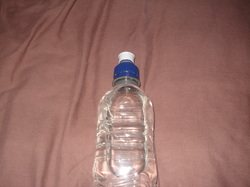 Of course this had to be included! It’s the item all my friends associate with me. This very blog is named after it! Of course, in reality, there have been more than sixty individual water bottles, but as I throw one out and it’s replaced with another, the essence of ‘the’ Trusty Water Bottle transfers from one to the other. It’s a wonderful all-purpose tool which can put out fires, clean up messes, provide water, act as a relaxant, act as a stress ball, be a pointer, give me energy… It can do anything, basically and I feel strange without it. I started carrying it in 2008 and I have fond memories involving it and almost every person I’ve ever met. That could be a blog post all on its own…

This entry was posted in All, Best Entries, Thoughts. Bookmark the permalink.