The Significance of Colin the Cow 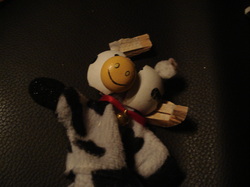 Yesterday I had the very big misfortune of having my beloved Colin broken (as you can see in the picture). I visited my Nan’s house for dinner, realised he was missing just as I was leaving, then found him in this critical state outside my house. I’m very sad that he’s broken, and that’s because Colin has a lot of significance to him.

While it may seem that he is a mere child’s toy, it goes quite beyond that. It’s not a case of me getting over excited and thinking “Oh my goodness! A cow. How lovely, I think I’ll carry him around with me!” though that is a small aspect. I bought Colin during summer last year, and since then he has developed a lot of meaning.

Initially, Colin was just an in-joke between me and two very good friends of mine, which is reason enough for me to be very attached to him, but there’s more than that. Colin embodies my friendships with those people, and should a sad time come along when I am no longer in contact with either of them, Colin will be a physical relic of that time which I will be able to look fondly on.

Other than that however, Colin is already a physical relic of a loved one who I can no longer see. When I visited my Grandad in the hospital last summer he said to me “I like your cow” and then he sadly died less than a week later.  Those were his last words to me, and he, already, could barely speak at the time. This was only a short while after I’d bought Colin, without him maybe he wouldn’t have said anything that day.

Then, of course, there’s the very first Finger Puppet Show. A good friend of mine was feeling pretty sad due to various reasons at the time, so I decided to make a small comic strip with Colin to try and cheer them up a little. From that sprang all of the Finger Puppet Shows, so it’s quite an odd string of coincidences that I make them at all.

So, you see, Colin has a lot of significance. To some it may seem that I have undue affection for random objects (such as my, sadly broken, yo-yo or my Trusty Water Bottle), but that’s not the case at all. This is why I feel so sad if one of them breaks, I’m not just losing the physical objects, but also all of the memories and emotions attached to it.

This entry was posted in All, Anecdotes, Best Entries, Thoughts. Bookmark the permalink.