A Study in Scarlet by Arthur Conan Doyle 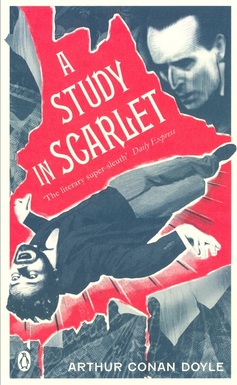 This is the novel that introduced the world to one of my all-time favourite characters: Sherlock Holmes. As with all of his stories this book takes the form of a murder mystery.

The first half of the book is about how Dr. Watson first met Holmes and then how they got involved with the investigation of this story’s main murder. Here you get all of the things that make the Sherlock Holmes stories so good: charming little chats between Holmes and Watson, Holmes’s arrogance towards police, scenes of excellent deduction and Holmes’s loveable eccentricities. All of this is written from the point of view of Dr. Watson; we see Sherlock Holmes, this extraordinary man, through the eyes of an ordinary man like us and through that we get to see how he ‘works’, if that makes sense.

The second half is, quite unexpectedly, a flashback to Salt Lake City in America. Here the novel shifts from the first person storytelling of Dr. Watson and gives you a third person account of a man named John Ferrier and his adopted daughter Lucy. I must admit, I was cautious about this change, as I worried it’d be boring, but it was actually very good. They’re a pair of very likeable characters and their edgy relationship with their Mormon neighbours is quite tense and I found myself quite concerned for them. It’s also very interesting, as you’ll learn quite a bit of historical information about America in that area at that time, and it’s always nice to learn new things while you’re being entertained.