Batman: Year One by Frank Miller 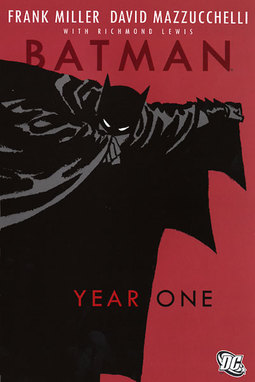 For people who are mildly interested in the world of super hero fiction, the idea of finding a place to start amongst all the tangled threads of continuity and reboots must be quite daunting. That’s how I felt, at least. Batman had always been a hero I wanted to read about because I knew the character was influenced by Sherlock Holmes and he generally looked quite interesting, and it turns out that Year One was the perfect place to start.

Year One is Batman’s origin story and it’s very interesting. We’re introduced to the crime ridden streets of Gotham City and to the haunted millionaire, Bruce Wayne, whose tragic life leads him to become Batman. You’re also introduced to James Gordon, who has just moved to the area and works on the police force. The story switches between the perspectives of Bruce/Batman and James, which is a nice approach.

What was quite striking to me was how grim everything was; there are certainly a lot of adult themes used (and used in a mature way) and one scene in particular was especially shocking (I won’t spoil it.) All of this dark content does have the effect of making the whole comic rather depressing; this isn’t a bad thing, but it’s certainly something to bear in mind when you start reading. I had better talk a bit about the art-style too, as this adds to the tone; generally, the style is the kind of classic look for comic books and I think it suits it very well.

The only real downside of Year One, for me, was that it felt like it ended too abrubtly. It was kind of like the stage is set and then you’re left thinking “what next?” which I suppose is a good way of making me want to read more Batman comics! I guess, also, that this is a feeling that people who have read loads of Batman comics already won’t get.