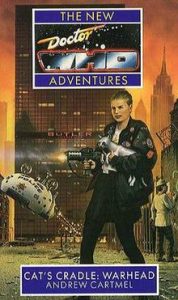 The ‘New Adventures’ range of Doctor Who novels has a reputation for being very adult and very bleak – Cat’s Cradle: Warhead is the first in the series which fits that description to a tee. However, while Timewyrm: Genesys, for example, features over the top sex and violence (which would never have been seen on the TV series) this is the first one to have what I would say was a much more mature approach to adult content.

It’s set in the near future and a huge corporation called the Butler Institute is one of many factors which are running the world into the ground. It’s a real dystopia, with the air so polluted that people are becoming ill just be breathing it in their day to day lives. There are gangs everywhere, because everyone is living in poverty and the likes of cancer and AIDS are claiming many young lives. People are disillusioned and have pretty much given up hope. With so many ties and references to things in our own world, it’s easy to believe that this could be the genuine future we are headed for. It’s the kind of thing Doctor Who doesn’t usually cover, but I’m really glad they did.

Of course, The Doctor has decided to stand up to the corporate powers that are destroying the world – but he’s not the impish and whimsical figure that he is often portrayed as. This is a much colder Doctor, a grand chess master using people as pawns in his unending quest to destroy evil. Ace assists him with his work and I honestly felt quite bad for her, because she and the Doctor are separated for much of the novel and he seems to force her to do all the leg work in his plans – often leaving her to face very dangerous situations alone. But I like Ace and it is nice for her to get a lot of focus. I like her a bit more with each new NA.

Overall, I really enjoyed this and, actually, it draws very little from the rest of the Doctor Who mythos and would probably work well as novel on its own. Having said that, some fans of Doctor Who might dislike it due to the fact that it is so different to traditional Doctor Who stories. Still, this is a solid piece of dystopian science fiction that I’d recommend to anyone with a passing interesting in the franchise.