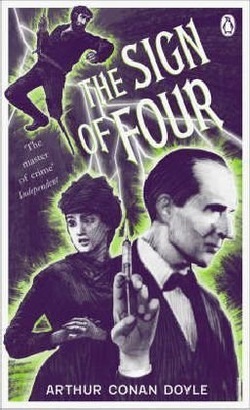 This is the second Sherlock Holmes novel and, while I do think you’ll enjoy this a little more if you’ve already read the first, it’s hardly necessary as the main story is largely standalone. As with the majority of Holmes stories, this is written in the first person by Dr. Watson which gives as a rather good view of Holmes and also provides a reason for his deductions to be explained.

This book gives us more information about Sherlock Holmes himself. Here we learn about his cocaine addiction, drastic mood-swings and his lack of interest in love and marriage. I feel that these give an extra dimension to the marvelous eccentric that he was in the previous book. There are also many lovely scenes of dialogue between him and various other characters.

Sadly, the story itself isn’t quite up to the standard of the first novel. The mystery that Holmes is working to solve is rather convoluted and hard to follow. Furthermore, a great deal of the story is to do with things which took place in the East and unfortunately, due to the time of writing, there are various racial stereotypes used and it is rather jarring.

Still, I shouldn’t only focus on negativity! This is still a novel that I would suggest you read and one that has nice doses of humour, mystery and drama. I quite liked that there was also a sweet and subtle romance sub-plot that goes on in the background and leads to a nice pay-off. Plus, while the mystery may be a little too complicated for me, it did mostly all make sense by the end. You may be confused and having a hard time keeping all of the strands fresh in your head, but don’t give up! It is wrapped up mostly coherently at the end.