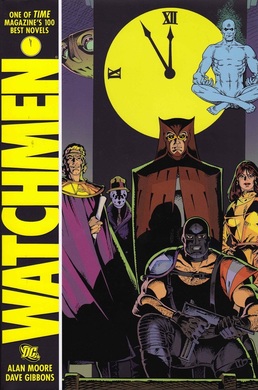 Alan Moore’s Watchmen is a standalone graphic novel, which takes the superhero genre and tries to play it as realistically as possible. The result is something which is very pleasing and something which can be enjoyed both by fans of the genre and those who are unfamiliar with it.

The titular Watchmen are a group of superheroes who are publicly known and used by the government, and none of them are really the paragons of morality that you’d classically associate with superheroes. Perhaps the most disgusting of the group is one called The Comedian, a character who is immensely unlikeable and who commits a wide variety of atrocities throughout the story. My favourite, meanwhile, is Dr. Manhattan a man who, after some mistake in a science experiment, has become virtually omnipotent. Dr. Manhattan is very interesting because he knows everything that is going to happen, including what he is going to do, so he can only do what he knows he is going to do as he is bound by causality to do so. At one point he comments that for him, all of his life is happening at once, and he can duplicate himself to do multiple things at the same time, and, as I’m sure you can imagine, this makes him seem un-human to some, especially his romantic partner, who feels quite alienated by it. A lot of the team are shown to struggle with things like that, and it makes them all rather endearing characters.

I must warn anybody who’s going to read this, though, that it is rather a depressing story. There’s rape, the murder of innocents, the deaths of main characters, war crimes and all manner of other horrible things. All of this is against the backdrop of the 1980s fear of nuclear war and we’re constantly told how the cold war is escalating and how a nuclear strike is becoming more and more likely. But this feeling of doom, this sense that the end of the world could come at any moment, gives the whole thing such a great atmosphere and feeling of tension that it can be hard to put down.

So, on the whole, I’d say this is well worth a read. The only downsides, for me, were the fact that it became a bit too depressing at times and that there was also the occasional boring period.