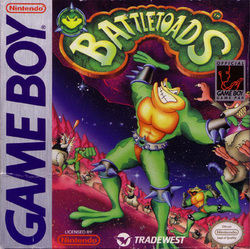 Battletoads is often remembered as one of the most difficult NES games, which earned it quite a cult following. Since it was so popular, it was followed up with a Game Boy game as well, but while it may have the same title, this Battletoads game is completely different from the original.

You play only as the Battletoad Zitz as the other two have been kidnapped by the Dark Queen; he is on a quest to rescue his friends and to take down the Dark Queen’s forces as he does so.

What is especially appealing is that each level of this game is very distinct; the first has you moving along through a semi-3D area and fighting all the enemies you come across; the second area has you flying through the sky and avoiding obstacles and a later area has you riding through a swamp on a jet ski. This variety is something I appreciated a lot.

However, there are only really eight levels, which might make the game seem very short. The thing is, it’s designed to be very hard and so you are encouraged to try many times until you are able to get all the way to the end. What I like is that, while it can be very tricky, the difficulty always seems fair; it feels like there’s a pattern to learn for each level and I felt a great sense of satisfaction when I finally managed to get to the end. Although, having said that, a couple of the later levels didn’t feel fair at all and, when I won, I certainly felt it had been down to luck rather than skill.

Taking a step back from the game and looking at it in the context of what came later, I liked how much of it felt like a prototype to Rare’s work with the Donkey Kong series. It felt especially similar to the Donkey Kong Land series at times (both having a David Wise soundtrack and having that similar monochrome aesthetic) which was something I enjoyed; I even noticed that there’s a strange tornado enemy that appears in this game and also in the first Donkey Kong Land (or at least a near identical one, I’m not 100% sure.) That’s the kind of thing I get quite excited about.

So if you want a tough but charming game, with excellent levels and some silly, over the top fighting, then give this Battletoads a try. It’s hard, but fair and, most importantly, enjoyable.