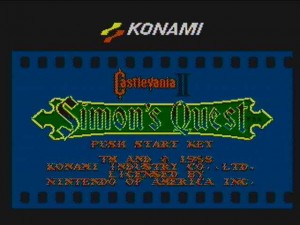 The first Castlevania game for the NES was very popular and is remembered fondly to this day (even if it is hard.) It’s not surprising that it was eventually given a sequel, but the sequel’s not so fondly remembered…

With the first Castlevania all you ever had to do was get to the end of very linear levels, but this was often very tricky because of the many, very agile enemies. You never had to really think about what had to be done, it was just that what had to be done was difficult. Castlevania II meanwhile, puts you into a 2D world which is basically completely open and you have to figure everything out for yourself.

Story-wise, you find out that Dracula put a curse on Simon just as he was defeated at the end of the first game and so he needs to revive Dracula so that the curse can be reversed.   You travel around looking for different parts of Dracula so you can put him back together. It’s a bit weird really. In fact, the whole game is weird.

To be honest, without following an online guide, I don’t think I’d ever have completed Simon’s Quest. You’re given no real direction as to what you need to do and often what you need to do is just totally random and bizarre. “Stand in this exact spot and crouch while holding a piece of garlic,” is the kind of thing that you’ll find in any guide and exactly the kind of thing you have to do throughout. I’ve no idea how anybody ever figured these things out for themselves.

Other than being hard to figure out, I don’t think Castlevania II is quite as hard as Castlevania as the enemies always seemed easier to fight. The bosses are much easier and the enemy creatures don’t seem so overpowered. This is a good thing, I think, since the first was often far too difficult… The problem is that it’s just much harder in different ways!

As always with Castlevania, this game has a really fantastic soundtrack which I thought set the tone perfectly. I did feel, however, that a little less was drawn from literature and mythology this time, than is usually the case, which is a shame. Nonetheless, I still found this game very enjoyable (once I used a guide) and would probably recommend it to fans or to people who love hard games. Rating: 6.8/10