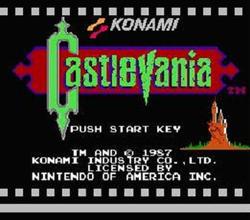 Castlevania is a gaming series which has been around for a long time. It’s renowned for its use of gothic horror imagery and use of characters and creatures from literature and mythology. Most specifically, they tend to focus on Dracula. This game is what started it all.

The gameplay is a 2D action platformer. You play as a man named Simon Belmont and you fight through hordes of skeletons and other undead creatures with his signature weapon: the whip. There’s a general combination of having to jump over platforms, avoid enemies and fight enemies. A downside is, however, that Simon is rather sluggish and the majority of enemies are much more mobile than him. Often it feels downright impossible to avoid the enemies and in the later levels especially, I had a very hard time with the game.

But while the difficulty and control scheme might be off-putting for some, I find that the game does really well when it comes to atmosphere and music. Though, of course, the entire soundtrack is entirely 8-bit, it is still very, very good and it perfectly complements the game’s settings (which are all areas in and around Dracula’s castle). The game also draws a clear and heavy influence from the Universal Studios monster movies; not only is Simon on a quest to wipe out Dracula, but you’ll also see Frankenstein’s monster, the Mummy and other classical ‘monsters’ along the way. As a big fan of these films, I really appreciated all of the connections to them.

So, the game is fun and I really appreciated the way that it drew from a range of horror sources. Nonetheless, it is a very tough game and this may prove frustrating for many people. But it’s still well worth a play, if only out of curiosity! I’m sure, at very least, you’ll have a lot of fun playing the first few levels.