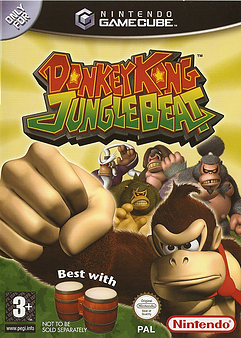 In 1994 Rare revolutionised the Donkey Kong series and took control of it, making numerous entries. In 2002 Rare were bought out by Microsoft, meaning that Nintendo had to take back control of the series and it’s clear that they didn’t know what to do. Over the next eight years, there were several experimental games, all straying far from what Rare had established. Donkey Kong: Jungle Beat might just be the worst example.

Let me start by telling you what I do like about it. Very uniquely, this is a side scrolling game that uses the GameCube’s bongo controller; hit the left bongo repeatedly to go left, the right, to go right and clap to interact with the world around you. The music goes along with your bongo playing and it sometimes feels amazing when you really get into a level and are hitting the bongos just right so that Donkey speeds through the level and you get as many points as possible (high scores are important). Having Donkey Kong’s movements tied to your own in this way is a great way to make you feel immersed.

I also enjoyed a fair few of the new characters; Orco the killer whale is excellent, Hoofer the ram makes for some of the most fun levels and Ghastly King (or Cactus King) is a very cool villain. Levels are often rather beautiful too.

But what I don’t like about Donkey Kong: Jungle Beat is that it seems to completely disregard all of the work Rare did on the series. Donkey Kong maintains his Rare design, but everything else that they introduced has been forgotten. Where are the other Kongs? Who are these evil Kongs? Where are the Kremlings? Why is the world full of freakish abominations? What does Donkey Kong himself actually have to do with any of this? Many of the characters and creatures seem like obvious replacements for things Rare created, when there was no real reason that Rare’s creations could not be used. I’m especially disappointed with the fact that Donkey Kong is portrayed as an insane, violence-loving maniac, rather than the laid back ruler of Donkey Kong Island that Rare had turned him into.

Plus, while I can appreciate the innovation of the bongo controls and the fact that they do work very well sometimes, when they don’t work well, they are very frustrating. There were countless times when I thought to myself “I’d be having a lot more fun right now if this game had normal controls…” and that’s quite sad, I think.

So, on the whole, this is a very mixed bag. When it’s good, it’s fantastic, but when it’s bad it’s irritating and it’s a shame that it seems to change so often. Nonetheless, for such a unique and experimental game, it’s definitely worth a play. I’m sure somebody else might play it and think it the best the series has ever been, so do go ahead and make up your own mind. Perhaps it’s just devoted fans like me who will have an issue with this.