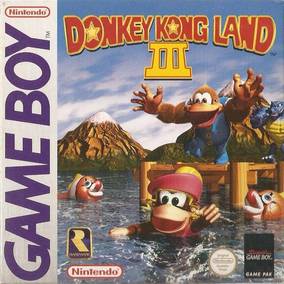 Donkey Kong Land III is the sixth and final game in the original set of 2D Donkey Kong platformers made by Rare. This is a kind of side-game to Donkey Kong Country 3: Dixie Kong’s Double Trouble! which uses many of that game’s assets, but still gives you a unique experience, much like the earlier Land titles and their respective counterparts.

You play as either Kiddy or Dixie Kong and the story is that that pair of them have entered a contest in order to be the first to find the mysterious Lost World, with the other entrants being Donkey and Diddy Kong (as a team) and K. Rool and his Kremling soldiers. What I like about this story is that it really encourages you to explore the game’s levels. If you don’t explore you won’t find the items you need to get to the Lost World. You can just quickly go through the levels and you will get to a final boss eventually and get an ending, but to get the most fun out of it, you should really comb through every level (the same applies to other games in the series) and it’s nice that this element has been given an actual story focus this time.

There are five worlds to get through with a secret sixth to unlock, which may seem a little short, but I think you get a reasonable number of levels packed into these worlds. You get to go through caves, mountains, waterfalls and forests which, even though they’re in monochromatic 8-bit, are still very nice to look at and are all accompanied by an impressive soundtrack. Certain levels feature playable Animal Buddies too, such as Ellie the Elephant and Enguarde the Swordfish, which offer nice changes to gameplay; though I do wish Parry the Parallel Bird appeared.

On the whole, this is a nice little game and one which does an impressive job of pushing the capacity of the original Game Boy. It’s a nice new adventure for Dixie and Kiddy Kong (who I feel deserve more appearances) and it nicely compliments its Country counterpart.