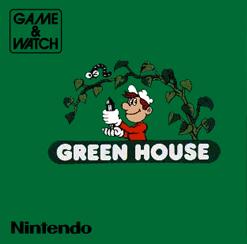 This is, so far, the best of all the Game & Watch games I’ve had the chance to play. In Green House you play as an unnamed gardener (who may or may not be Stanley from Donkey Kong 3) who must keep the plants in his greenhouse safe from spiders and worms. This is a problem which, I imagine, real life gardeners face much more often than violent gorillas.

The game is played on a two-screen system. The top screen is the top floor of Stanley’s green house and the bottom screen is the ground floor. To the left and right of each floor is a nice flower which various insects descend toward with the intent of destroying it. You have to keep an eye on all the insects and when they begin to get close to any of the plants you’ll have to rush over and shoot them with your bug-spray gun.

Obviously, being a Game & Watch game, the graphics are extremely basic: everything is just a black silhouette and everything moves in a very jerky way too, but none of that is a problem for me. You get one point each time you spray a bug and you’ll get hooked into the game and not want to stop. I once spent over an hour getting 1,400 or so points and since it’s so fun, trying to beat your score is rather addictive. The game gets harder and harder the longer you play as well, so, don’t think it’s going to be really easy! You only have three lives too (you lose one each time a plant dies) and lives are hard to regain. Also, for additional challenge there is a hard mode. Like all Game & Watch games this comes with a built in clock and alarm, which is nice.

It’s probably the best a Game & Watch game could be, but, as they’re very basic, I feel I can’t give it any higher than an 8/10.

Buy it here as part of Game & Watch Gallery 3.

Buy it here as part of Game & Watch Collection.