Kid Icarus: Of Myths and Monsters 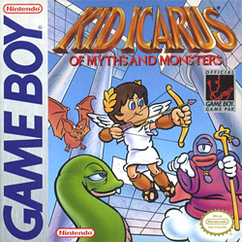 Four years after the first Kid Icarus, a sequel (Kid Icarus: Of Myths and Monsters) was released. However, while this is a return for the characters of the first game, this isn’t much of a sequel story-wise. At the start of the game, Palutena has a premonition of the coming of a demon named Orcos and so to prepare for this, Pit must travel around to three dungeons in order to obtain the three sacred treasures… Just like he did last time. Of course, this time Orcos is the villain, rather than Medusa, so the story isn’t exactly the same, but I can’t help but wonder why Pit didn’t just keep the sacred treasures after the last game.

In terms of gameplay, Of Myths and Monsters is pretty much exactly the same as the first game. It’s a 2D platformer, but instead of just sidescrolling, there are also levels where you have to move upward. There are, of course, also the three dungeon levels where you have to find a boss who guards a sacred treasure, but can pretty much go where ever you please (left, right, up, down) as you make your way through. Quite nicely, a few little annoying problems from the last game have now been fixed: enemies will now sometimes drop items which can restore health (an enormous help), when you enter a shop (or other building) you don’t have to wait for all the shopkeeper’s speech to slowly appear on-screen before you can move (which was annoying when you didn’t even mean to go in) and power ups are also much easier to come by. Graphically, I think this one is just a little nicer too (even though black and white).

The biggest noticeable difference between this game and its prequel is the difficulty. The first game can be very tricky indeed at parts, where as this game (aside from the bosses) is never really hard at all, which is a shame because they’ve added all these things to make it less hard as well, even though you don’t need them this time. You’d think this decrease in difficulty would be quite good, considering the other one felt too hard at times, but with this game not being hard, you realise that it’s actually very short. You can breeze through this in under five hours and, other than doing it again, there’s not much else you can do after that.

So, I think this game takes a step forward at the same time as taking a step back. I can’t rate it any higher or lower than the first one.