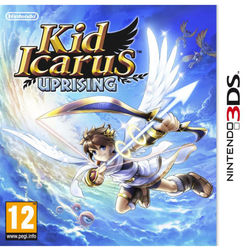 Kid Icarus had been remembered as a cult classic and one of the best games on the NES. Pit himself was considered something of a Nintendo icon. But the fact is that after it’s fairly similar sequel, there wasn’t another new Kid Icarus game for twenty-one years!

Kid Icarus: Uprising was a triumphant return for the series and one which outdid both of the previous instalments quite significantly! The previous two games had been 2D sidescrolling games, but this game is made up of 3D flying segments and 3D on-foot combat segments. Both have fairly different kinds of gameplay and both are equally fun. There are several different missions that Pit is sent on by the goddess Palutena; they all start with him having to fly somewhere (rapidly shooting at airborne enemies on the way) and then landing somewhere and fighting through enemies until you find a boss. It’s a fun and satisfying.

What I especially like about Kid Icarus: Uprising though, is its story and characters. The story initially seems to be fairly straightforward (the kind of thing you’d expect from Nintendo games) but takes several unexpected twists and turns and becomes something extremely unique: What makes this especially interesting is the fact that it is full of well-developed characters: Pit and Palutena are both given full personalities for the first time and the way that they interact with one another makes their friendship feel very real. There are also several brand new characters introduced, such as Dark Pit and Viridi, the goddess of nature. Virid was definitely my favourite character as she’s very funny, likeable and interesting. I certainly hope that we will get to see more of her in future. It’s the strong characters that give the story emotion; it’s no exaggeration to say I found it very moving at times.

There’s a lot of additional content beyond the main story too: a fun multiplayer battle mode, an enemy and weapon gallery to fill in, a huge range of difficulties, alternate paths through certain levels and a large number of achievements to unlock. All of these things combine to add a high level of replayability; especially if you’re a completionist! There are also a lot of treats for the fans: as well as lots of nostalgic connections to the first game (none to the second though, which was disappointing) there are also loads of Easter Eggs which make reference to Nintendo’s many other franchises, so this game will be quite a treat for big Nintendo fans. On the whole, there are not many bad things to say about Kid Icarus: Uprising.