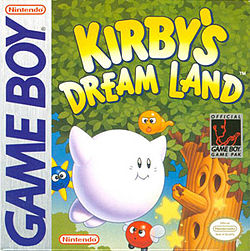 This is the game that introduced us one of Nintendo’s most well-known and beloved characters: Kirby – although Kirby is a little different in his first appearance because he lacks the ability to steal the powers of creatures he consumes. He can still eat the enemies, he just can’t take any powers from them.

Anyway, Kirby’s Dream Land is a pleasant little 2D platforming game. I say “little” because it really is a very short game: You’ll probably be able to do the whole thing in less than an hour. But the thing is, while it is very short, it’s still very pleasant.

The story goes that King Dedede has stolen all of Dream Land’s supply of food, causing the people to go hungry, so Kirby sets out across the land to get it back. I actually feel like because the game is so short, it feels like you really are going on the journey along with Kirby.

I generally find the whole experience very relaxing. The game is never all that hard, but it also manages to avoid being boring – meanwhile, it has a really nice 8-bit soundtrack and a really nice, hard to define, ‘tone’ to it all. I enjoy every second of it and find the whole game a delight.

The fact that it’s so short is the only thing that Kirby’s Dream Land has against it, but on the other hand, the length almost seems to perfectly match the laid back, peaceful, relaxing feel to the whole game. It’s a fun, pleasant game and an important piece of Nintendo history… Just don’t expect much of a comprehensive game out of it.