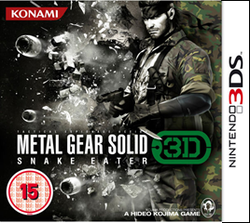 While I do tend to prefer reviewing originals before I review remakes, I don’t think I’m ever likely to play the original Snake Eater, and so I shall just review the 3DS version as if it were the original. I also hear that it’s pretty close to the original anyway.

This game has a storyline which, it seems, the creators went to a lot of trouble to tie into real historical events. When you start playing for the first time, you’ll be treated to a thirty-minute long cut scene which establishes the story. This opening movie mixes actual historical footage amongst the scenes. In fact, all of the cut scenes in this game are a real upside; they’re very much like something from a film. Through these, you really get to know and like the main characters, especially Naked Snake, the protagonist. He may seem as if he’s just a typical tough guy at first, but you learn that he’s really rather loveable.

But, finally onto the subject of the actual gameplay. As Snake, you sneak around the jungle and into various enemy buildings and such, you have to avoid the guards and win the various tasks you’re given. Using various weapons to fight your way through when necessary, especially during boss fights. When you’re hiding under a table, and you see a guard coming your way, it gives you a real feeling of suspense! However, this suspense is occasionally let down by the fact that those guards can be complete idiots… Occasionally they’ll just entirely forget having discovered a body a few minutes ago, or miss seeing you walk right passed them. Though I suppose, the harder the difficulty you set it to, the more intelligent they are.

While the gameplay is very linear and you pretty much go to one place, do something, then get told to go to another place, there is still plenty to do other than just carry on with the story. You have a whole jungle to explore, and it’s full of secret little areas and items to discover! One particularly little fun thing, is the fact that every different area of the game has a small Yoshi doll hidden in it, so you can enjoy hunting around for them. I believe other versions of the game have a different type of doll.

What I also like, is that, while the game has a relatively serious story, there’s also a nice mixture of sci-fi and fantasy thrown into the mixture of things. This, for me, is a very good upside as, what is in my opinion the best boss battle in the game, is very surreal and verges very much into the realm of horror. But there’s also a lot of humour thrown in too, the small dialogues when you save the game for example, are hilarious. This game will certainly make you feel all of the emotions!

Overall, while it may occasionally feel slightly repetitious at times, this game is certainly worth playing and its faults can easily be overlooked. 8.8/10