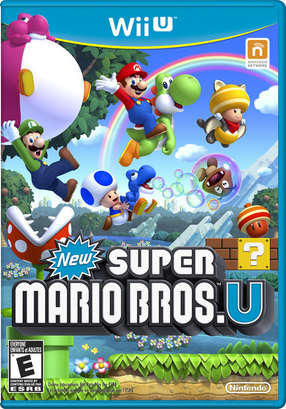 New Super Mario Bros. U is the fourth game in the New Super Mario Bros. series and by this point it’s starting to feel increasingly mistitled. The gameplay and art style is exactly the same as it has been since the first game and, if you’ve played all of them up until this point, you may understandably be starting to feel a little tired of the formula.

Story-wise, things have been changed very slightly; this time Bowser has actually come to Peach’s castle and thrown Mario, Luigi and co. to a far off land so that they have to make their way back to the castle which is now being occupied by Bowser. What’s disappointing is that, even though you’re in a new location, very little is made of it and the environments all look very similar to those in the earlier games.

What is nice, however, is that there is a big inter-connected world map which you can explore at your leisure. Don’t get me wrong, the game is still made up of small linear levels, but you get to them via a nice big map and at times you’re even given branching paths! It reminded me of the map in Super Mario World, which I was also fond of.

But then, back to the subject of things being the same, all of the boss battles were pretty predictable and felt like things I had seen before in the series. The bosses, especially the final boss, were perhaps the biggest let down of the game; as well as being very predictable, they were also far too easy.

Thankfully, after they had been absent in New Super Mario Bros. 2, the Yoshis are rideable in a number of levels once again and there is also a fun four player co-op mode. I am still disappointed, however, by the fact that you cannot keep Yoshi with you from level to level. I can’t quite understand why this is, either, as it surely can’t be a technical limitation. As well as fully grown Yoshis, this game also features adorable baby Yoshis who you can carry; each different colour has its own power and they sing along with the background music (which I like a lot). Hilariously, they eat virtually any enemy you carry them to.

Two new things called Challenge Mode and Boost Rush have also been added. In these modes I was pleasantly surprised to find that you are able to play as your Miis. In Challenge Mode, you are put in a level and given a certain task to complete and these can often be very tricky. Boost Rush is a spin on New Super Mario Bros. 2‘s Coin Rush and you have to hurry through a level as quickly as you can while collecting coins. Both of these are nice little additions, but nothing substantial.

On the whole, I don’t want to say that this is a bad game, because it is quite fun, but it does represent a disappointing lack of variety and creativity in the Mario series. If you’ve never played a New Super Mario Bros. game before, you’ll love this game and have no problems with it at all, but if you’ve played its three prequels first, you’ll probably find yourself wanting something just a little bit more unique.