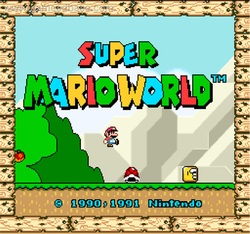 When Nintendo came out with their second home console, the SNES, they also released an exciting new Mario game. Super Mario World is that game.

This time the game isn’t set in the Mushroom Kingdom but, instead, in Dinosaur Land where Mario, Luigi and Peach are having themselves a holiday. Of course, Bowser and his Koopalings also happen to be there, so he kidnaps Peach and Mario must travel across this new land in order to defeat all of them and rescue her. The change of setting is quite nice, I think, as it brings with it some new kinds of levels that hadn’t been seen up until now such as forests, ghost houses and volcanic tunnels. Though most importantly, it is in Dinosaur Land where Mario meets Yoshi who becomes an integral part of the series.

Yoshi brings with him a nice addition to the gameplay. When going through the levels you will occasionally find a Yoshi egg which Yoshi will be inside of. Once you’ve freed him from his egg, you can ride Yoshi through the level and any levels afterward that you manage to keep him through. Yoshi can eat most of the enemies and he gives you an extra hit before losing a life. When you do come into contact with an enemy, Yoshi will run away in fear, but, unless he runs off a cliff, you can just hop back onto him and continue riding. As well as Yoshi, this game also gives a new power up in the form of the cape which you can use to fly and the balloon which also helps you to fly, but in a different way. You’re also offered a similar multiplayer option that previous games in the series have: player 1 is Mario, player 2 is Luigi, they both play identically and take it in turns to play a level, which is a nice way to make the game fun for more than one person, but not amazing.

One thing I especially liked about Super Mario World was the fact that it really does feel like you’re exploring a large new area. You start on a large overworld map and there are two directions you can head, each presenting you with a different side-scrolling level. So you see, from the start you’re given more freedom than in other 2D Mario games. Many levels have secret exits which branch out into other directions and there are, in fact, two whole secret areas which are fun to discover. The levels are all pretty fun and once you’ve finished the main storyline, I imagine you’ll go back and play some of them again and, when doing so, it’s likely that you’ll stumble across places you’d never noticed before and then you’ll end up opening a whole new part of the world.

It’s a wonderful addition to the Mario series and it has a lovely art style too. Rating: 9.2/10.

(Click here for information on an interesting fan creation.)