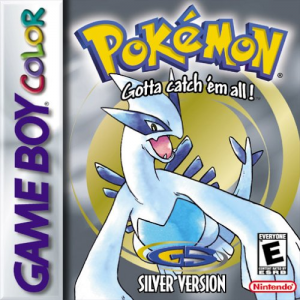 Though I have been a fan of the franchise since the beginning, somehow or another I ended up skipping over Pokémon Gold & Silver. It was a shame because I knew that a lot of people regarded the second generation of Pokémon as the best generation, but time slipped away and before I knew it, the only real option would have been buying an old cartridge for a ridiculously high price and without any guarantee that it would still be able to save – this all changed with the delightful news that these two games were coming to the 3DS Virtual Console. I downloaded Pokémon Silver Version about a year ago and I have been playing it extensively ever since.

I was mildly concerned that I may find that it had aged terribly and that by playing it so late, I had missed my opportunity to truly enjoy and appreciate it. Thankfully, this was not the case. It improves over the first generation in several ways (for example, letting you use HM moves on the map just by pressing A, rather than having to pause and go through several menus or by adding a small Poké Ball symbol next to wild Pokémon to signify whether or not you’v caught them before). In terms of general gameplay, there are a lot of small changes like that which help to improve your ‘quality of life’ as you play – combined, they all help to give you a much more streamlined experience.

Visually, while it maintains the art style of the first two games, it also manages to improve upon them. So it never really loses the essence of the art from the first games, but it does lose the ugliness that was sometimes present in them. There are no longer weird bollard tiles everywhere, for example and the added colour does wonders. It looks better, even, than Pokémon Yellow Version, which had already attempted to enhance the visuals of the originals.

Obviously, at its heart, the gameplay is quite similar to the previous two games and that’s why I wanted to talk a lot about the improvements first. But it’s not just the same game again – not at all. The previous game had you play as a trainer who was starting out in the Kanto region, but this time you’re in the Johto region. I prefer Johto over Kanto for a few reasons. There are some more interesting locations (ancient temples, icy caves, etc.) and it also feels like more of a living breathing world – just in terms of things like the dialogue from NPCs, the radio channel you can listen to anytime and the services available, such a day care centres (for breeding Pokémon) and groomers (for increasing Pokémon happiness). You can swap mobile numbers with trainers you’ve defeated and they’ll call you up to chat or for a rematch from time to time. There are a lot of small details like this which really help to immerse you in the world.

With the story, while you are a different character, I’d say that this definitely a sequel to the first generation. With Pokémon this isn’t usually the case: each new generation is usually just ‘you’re a new person and you’re in a new region, time to start your adventure’ but this time there are a lot of ties to the previous games and even a lot of returning characters. I’d definitely recommend playing the first generation before these games for this reason – it does a great job of conveying the passing of time and how it changes people and places. I won’t spoil it, but the endgame content is really rewarding.

Overall, it just might be my favourite Pokémon generation. Aside from all the aspects I’ve mentioned, it’s also the game which introduced several of the Pokémon that are both popular and appealing to me personally, such as Pichu, Lugia, Ho-Oh, Unown, Tyranitar and Togepi. If you’re a fan and you haven’t played it, you should definitely give it a try and if you’re just a general gaming fan, I still recommend it as one of the all-time classics.