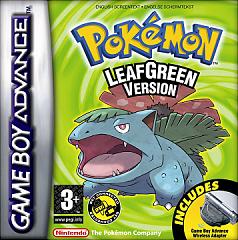 By 2004 the Pokémon series was still going strong. However, when compared to the most recent instalments, the originals were starting to look a little outdated; the graphics were greatly inferior and a lot of features present in later games had not yet been introduced. So we got LeafGreen and FireRed, which brought the first games up to the standard of the Pokémon games on the Game Boy Advance.

The whole world of Kanto is recreated rather beautifully in an art style which I personally feel works fine even by today’s standard and I really enjoyed getting the chance to rediscover everything. The world isn’t a carbon copy either. Some things have been moved around and I don’t want to spoil anything but this game adds a new area outside of Kanto (called the Sevii Islands) which extends the storyline and is a very welcome addition.

What’s more is that this remake has a much greater level of connectivity than the first two games did; not only can you trade your Pokémon with any of the other Game Boy Advance titles, but also with both Diamond and Pearl and the second Gamecube title. For me this is an enormous plus.

Other than that, all the improvements are small things; but small things that culminate in an overall improved experience. For example: your player character can now be male or female, you have the ability to run, the stats of the Pokémon use the updated modern system, the PC system has also been updated and is now hugely more convenient.

There are only two minor downsides to this remake: the first, very personally and subjectively, is that I have quite a nostalgic attachment to the original soundtrack (and certain other elements of the old version) and I don’t quite get the same special feeling when playing this. My second problem with it is the fact that they removed the infamous glitch Pokémon Missingno; I understand that, while cool, Missingno often had very damaging effects on a game, but as this is a remake it’d be nice if they ‘remade’ Missingno in a way so that there’d be no negative effects caused by obtaining it.

I’m sorry I haven’t gone too much into the actual details of the game, but as this is a remake I wanted to focus on what makes it different from the original, to get a full idea of this game you should read my review of the first two, too. But, to conclude, I shall just say that this is a very good game indeed and, if you’ve never played a Pokémon game before, this could be a good starting point.