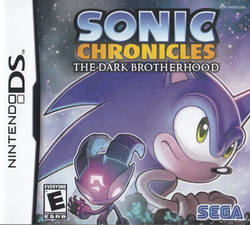 Sonic Chronicles: The Dark Brotherhood is a game I’ll always remember very fondly because it was given to me out of the blue as a kind gift from a good friend. So, really, the game got quite lucky, because if it weren’t for that pleasant context, I’d probably not think of it fondly at all.

Ha! I am exaggerating a bit, but in all honesty Sonic Chronicles is very much a mixed bag. It’s a first for the Sonic series because it’s an RPG (rather than a platformer) and since the Super Mario series’ RPGs were always fantastic, I went into this with high hopes. Maybe too high.

As is common for DS games, this game is controlled entirely with the touch screen. This is good and bad; it makes walking around the world frustrating, as it can be hard to make Sonic go where you want him to (boundaries are unclear), but on the other hand it gives the RPG battles a fun and unique edge. Having said that, once I got further into the game and the battles got longer, I got tired of the touch screen controls and wished I could just press buttons.

Speaking of battles, later in the game, these go on far too long when it comes to random encounters. Towards the end, I was running away from literally every single enemy because I couldn’t be bothered to waste five minutes fighting an insignificant enemy. Annoyingly, a large number of later enemies can ‘counter’ a lot of your attacks too, which means that if you hit them they don’t get hurt, you do, and sometimes they regenerate health as well!

But let’s talk about the game’s positives. While the story is a little hard to summarise, I loved the game’s writing. Many memorable Sonic characters appear and are playable. While there is no voice acting, you get to enjoy all of the usual comedic Sonic dialogue in text form. I was especially pleased when I found out that Big the Cat is playable in this game. I shan’t comment on how he is involved with the story, but Sonic Chronicle‘s might just contain my favourite appearance of Dr. Eggman (who I already love). Shadow, Amy, Tails, Knuckles and several other characters also appear in big roles. Also, I won’t spoil it, but I found the ending side-splittingly hilarious; what’s worrying is that I’m not sure if it was supposed to be funny or not!

But then, another negative is the game’s absolutely terrible soundtrack; it’s droning, monotonous and fails to create any kind of atmosphere. Rumour has it that the ‘real’ soundtrack was accidentally lost shortly before release and so they had to rush out another one, and judging by the quality of the finished product, it wouldn’t be a surprise! The bad soundtrack gives you a certain feeling as you play and probably makes everything feel even less fun than it already is.

Ultimately, I am happy I played Sonic Chronicles. The writing was often delightful, there are lots of references and connections to older games and at times it was genuinely enjoyable. But if you do want to play this game, just don’t forget that it does have quite a few significant flaws! Rating: 7/10