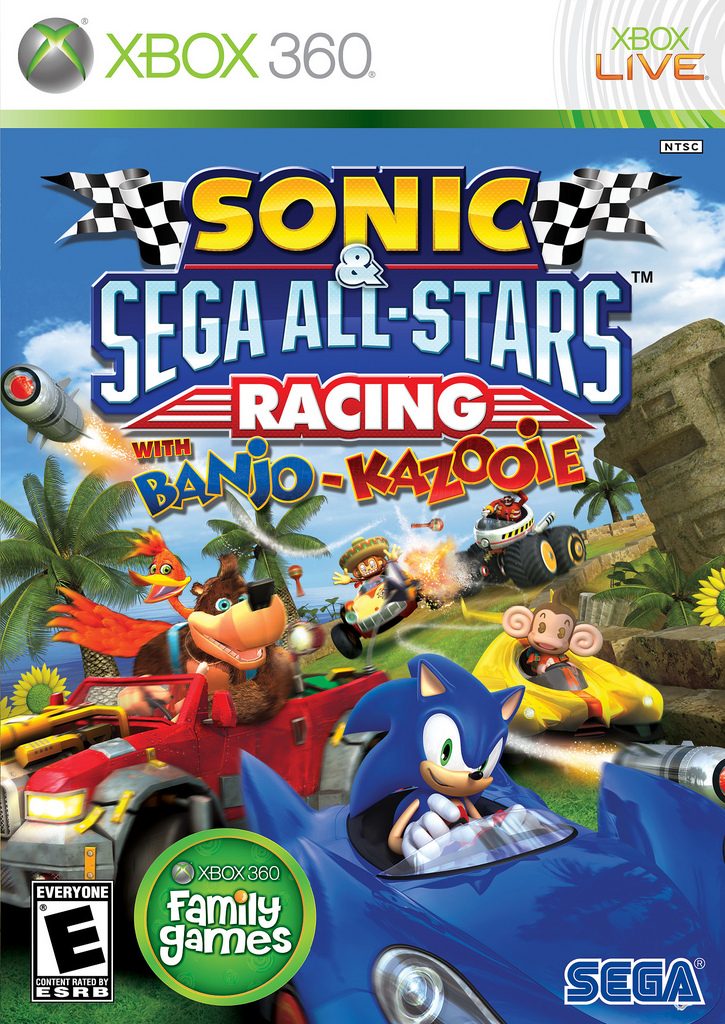 Sonic & Sega All-Stars Racing is a fun game which brings together many characters from the Sonic the Hedgehog franchise, alongside several characters from other Sega properties. It’s basically Sega’s approach to a Mario Kart (with a bit of Smash Bros.) and I like it very much.

In terms of characters, this game offers a very nice selection. You’ve got Sonic, Tails and Knuckles, who you’d expect, but it’s not just the main Sonic characters: you’ve also got Big the Cat! Although, sadly, he doesn’t control well, so I don’t play as this beloved character very often. Other Sega characters include Beat (the main character from Jet Set Radio), AiAi (from Super Monkey Ball), Robo and Mobo (the Bonanza Bros.), Billy Hatcher and even Ryo (the main character of Shenmue.) These are just a few highlights and you’ll find that there’s quite a large selection of Sega characters avaulable. There are also a few console exclusives: you can be Miis in the Wii version and Avatars in the Xbox 360 version. Most excitingly, the Xbox 360 game features Banjo and Kazooie as playable characters and obviously I’m going to buy any game with them in it (being a huge Rare fan.)

The levels are all pretty good as well. You’ve got some classic Sonic the Hedgehog levels (beaches, casinos and battleships), lovely urban Jet Set Radio stages, fun and creepy House of the Dead tracks and trippy Samba de Amigo ones too. The only downside is that all of the Super Monkey Ball levels are pretty bad – full of 90 degree turns that are really hard to prepare for. It’s a shame because I’m quite fond of Super Monkey Ball and I feel it gets badly represented. Sadly, Banjo and Kazooie do not have a race track and neither do some of the other characters.

One definite positive, is that I never felt like the CPU racers were cheating (like they do in Mario Kart) which helps to enhance the whole kart racing experience. The game also controls very well and is so easy to play, that anybody could get into it, with the higher difficulties offering a challenge to those who want it. There are also plenty of online and multiplayer modes, for those who want them. It’s possible that the announcer who talks throughout all of the races will annoy some people though.

There are several cups to play through and a fair number of unlockables, including new characters. There are extra music tracks for most levels (even including “Can You Feel the Sunshine?” from Sonic R) giving you lots of reasons to keep playing. There’s a “mission mode” as well, which gives you different and unusual tasks to complete – this is okay, but not amazing.

Overall, it’s a very good game and not only is it better than a good deal of the Mario Kart series, but it is also one of the best games Sonic has starred in. I definitely recommend it.