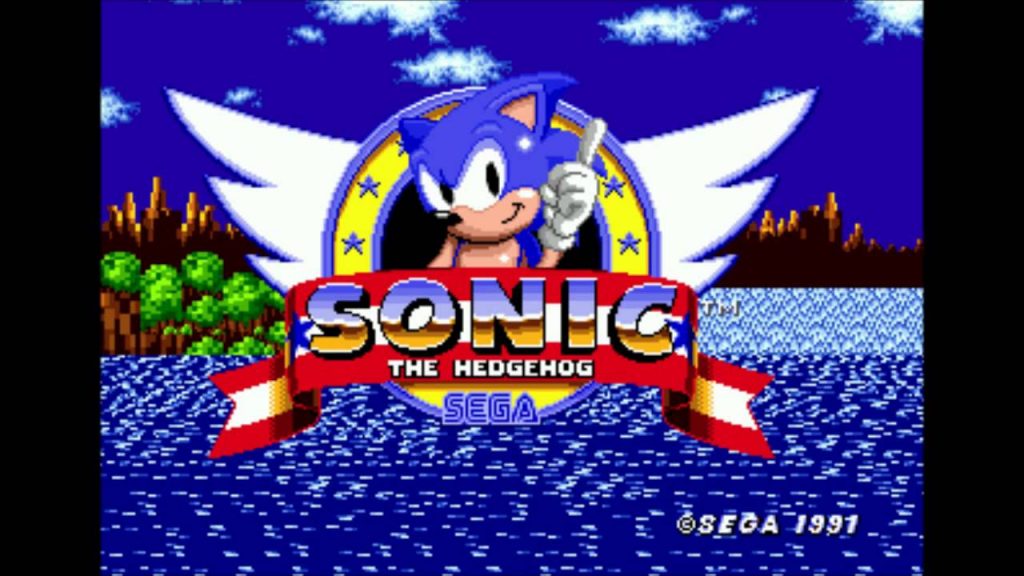 The Sonic the Hedgehog series is one that I am quite fond of and this is the game that started it all. I have a certain respect for this game for being the originator of a franchise that I get a lot of enjoyment out of, but having said that, I don’t actually think this game is all that good. To be honest, I’m baffled that this very flawed game was ever considered a rival to the greatly superior Super Mario World.

As I’m sure you can guess, you play as Sonic the Hedgehog and the story is rather simple as is quite common with 2D platforming games from that era. Dr. Robotnik (or Eggman, as he will always be called to me) has been building an army of robots and using innocent little animals as the fuel to power them, so Sonic sets out across the land, destroying the robots, freeing the little creatures and fighting Robotnik several times along the way. While he’s not yet the charming and hilarious villain he would later be, I still like him a lot in this game.

The game hasn’t got a save feature, so, it’s one of those games you have to complete in one go (although it does have a secret code you can enter which allows you to use any stage, which I used instead of saving) and, as is common with games of this kind, it isn’t all that long. The first level is Green Hill Zone, which has become quite iconic over the years and is quite nice. I was also rather fond of the underwater level, Labyrinth Zone which had you going through some mysterious, submerged ruins. Every third level also has a boss fight at the end of it; the boss fights are generally pretty easy, though one or two of them are rather tricky. I quite like Sonic‘s unique ring system where you collect rings in the levels and they then act as your health. If you get hit, you drop all your rings and have to quickly collect them again. The more rings you have, the easier they are to recollect and a skilled player might be able to survive on one ring for quite some time.

What I didn’t like about the game was its control system. Sonic generally felt very slidey and it always felt difficult to properly aim his jumps when attacking enemies. What’s worse is that this game is based around speed; Sonic’s unique ability is his power to run at the speed of sound. This on its own is a nice enough concept, but the problem stems from the fact that none of the game’s levels seem to be designed around this idea and, more often than not, if you go fast you’ll die because you’ll run into a sneakily placed enemy or trap. So instead I just moved very slowly through all the levels, making some of them feel like a chore.

I don’t want to be too negative, because without this game there’d be no other Sonic games and I like some of the later ones a lot, but this game does have some big problems. It’s not too bad and I did genuinely enjoy some of the levels, but with poorly designed levels, difficult controls and a rather bland soundtrack this wasn’t the classic I expected it to be.