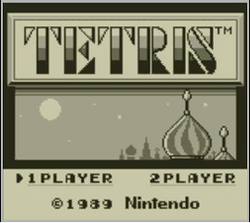 Tetris for the original Game Boy, is something which is really very enjoyable indeed. I’m sure everybody knows the timeless gameplay of slowly rotating the tetriminos as they gracefully fall to the ground, and hoping to get them in a straight line so that they can graciously fade from existence. But that’s not the only appeal of this game.

But of course, saying all that, it’s only something which will persuade you to buy a Tetris game, as opposed to THIS Tetris game. Well, let me just list off all of the things which make this incarnation of the beautiful puzzle game the one which you should buy:

Trust me; it’s worth your money! While not as enthralling as a game with a large expansive world or deep storyline, I play Tetris very often indeed, so I would rate it at 9.4/10