The Walking Dead Volume 2, Miles Behind Us by Robert Kirkman 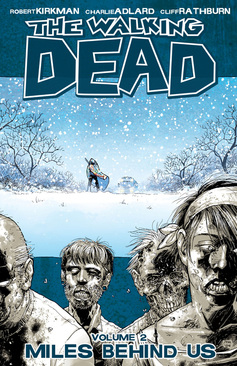 Right away, I had better say that this review is going to contain spoilers for the first volume, so, if you want to read it, don’t read this review! Anyway, now that that’s out of the way, it’s safe for me to tell you that Volume 2 picks up shortly after the ending of Volume 1; with the group burying the recently killed Shane.

To be honest, I don’t like the way that Shane’s death is handled. Carl is just a child, and he has murdered the person who, until very recently, was the group’s leader. Sure, he was scared and he thought that Shane was going to kill his dad, but still, Carl has killed somebody that they all cared about and I’m surprised nobody makes a big deal about it. Also, to me, it doesn’t feel like Shane would have killed Rick, he just seems to have been having an angry episode and probably would have stopped before he went too far.

That aside, I generally enjoyed Volume 2 a bit more than I did Volume 1. Things become a lot more dramatic and several interesting new characters are introduced. One character I found particularly interesting was Hershel Greene, who owns a farm that the group stays at for a while. He and his family bring an interesting dynamic to everything and were, perhaps, the best part of Volume 2’s storyline.

You may also realise that there has been a change of art style between the two volumes as a new illustrator has been brought in. The change is neither here nor there for me; I liked the old style and I like the new style. Both are good.

So, if you liked Volume 1, you’ll like Volume 2! It’s a better read and continues the story nicely. I suppose there was an odd romance focus at times, which felt unnecessary (and bad) but other than that, I’ve not many problems with it, and I look forward to Volume 3.