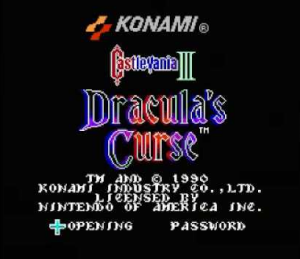 After two games about Simon Belmont’s struggles to defeat Dracula, the third main entry in the Castlevania series took a slightly different approach and showed us the story of Trevor Belmont – an ancestor of Simon’s.

Personally, I see this game as the definitive Castlevania experience on the NES. The graphics are really good for it’s time and it has that high-quality 8-bit look that a lot of people love and feel very nostalgic about. As with all Castlevania games, it has a fantastic soundtrack and for me, the best soundtrack of the series’ NES games. Together, the music and scenery can create an amazing atmosphere. Whether it’s horrifying, hellish caves or serene castles surrounded by water, it gets the feeling just right.

In terms of difficulty, it’s definitely still hard, but I feel like this game is much easier than the other two games (and the second one in particular.) The lessened difficulty means that it’s a lot more enjoyable to play. Even if you’re not good enough to actually complete it, you’ll be able to have fun getting far into it.

This game also introduces two exciting new elements to the series. First of all, there are branching paths to take, which will lead to different levels. If you really hate one level, you could start again and take a different path so that you don’t have to do it next time. It’s not only different levels you’ll encounter by taking different paths, but also different characters. Excitingly, there are three non-Belmont characters you can meet during the game and they are all playable and very different to Trevor (and Simon.) These characters are Sypha, a woman who uses magic, Grant, a man who can climb and has increased jumping skills and, my personal favourite, Alucard – Dracula’s son who can transform into a bat and fly.

The different characters and branching paths give the game a nice level of replayability and I’m really quite impressed with it on the whole. It feels a lot more comprehensive than a lot of NES games, although it does sadly lack the ability to save your progress – this is where modern releases with save states come in handy.

As with most games of this era, the story doesn’t take too much focus, so you shouldn’t worry about playing it without any foreknowledge. If you’d like to try just one Castlevania NES game, I’d say you should make it this one.