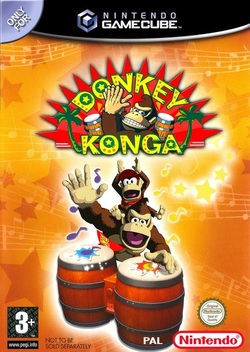 When Rare was purchased by Microsoft in 2002, it seems Nintendo were left quite unsure as to what to do with the Donkey Kong series as there were several rather experimental games released after this. We had the modern Donkey Kong acting like the classic one, we had a climbing based game and we had this game, which is probably the strangest of them all: a music game.

The storyline is especially weak: Donkey Kong and Diddy find some magic bongos one day, they talk to Cranky and decide to try and become musicians. Yep. But for a music game like this, what did you expect? I guess it’s nice to think of this as just an average day on Donkey Kong Island, the kind of thing they do when not on adventures.

So then the game has you playing a variety of different pieces of music on the bongos. You can play using the regular Gamecube controllers, but a big selling point of Donkey Konga is that you play it on special bongo controllers and that you are actually playing the songs yourself. How it works is that it shows Donkey Kong sitting at his bongos and then these notes come flying past and you have to hit the left drum, the right drum, both simultaneously or clap depending on what it is. It sounds basic, but it’s pretty fun.

The thing about the Donkey Kong series is that it is renowned for having outstanding music. All three parts of the original Donkey Kong Country trilogy? Astounding soundtracks. Donkey Kong 64? fantastic! So it surely wouldn’t be hard to fill a music game with Donkey Kong music! Except for some strange reason, most of the music is covers of pop songs. Sure, there are some good ones like ‘Don’t Stop Me Now’ and ’99 Red Balloons’ but they seem such strange choices. There are a couple of Donkey Kong pieces, but they’re just taken directly from Super Smash Bros. Melee. There are also a couple of pieces of classical music and new versions of the Super Mario Bros. theme and The Legend of Zelda theme. Every song can be played on a variety of difficulties, some being very, very hard, so there’s a lot of replayability. They can also be played in multiplayer mode.

Beyond the main music, there’re also a few pieces of additional content. There’s a whack-a-mole style game where you have to hit King K. Rool, a juggling game, other mini games and special unlockable versions of the bongos… All of which are rubbish and just make silly noises which spoil the songs! I used some of them out of curiosity, but mainly it is best to stick to the normal bongos!

On the whole it’s a fun experience… I just wonder why it’s a Donkey Kong game. It feels so weird and a lot of it doesn’t seem to make logical sense. Nonetheless, I did have fun with it.