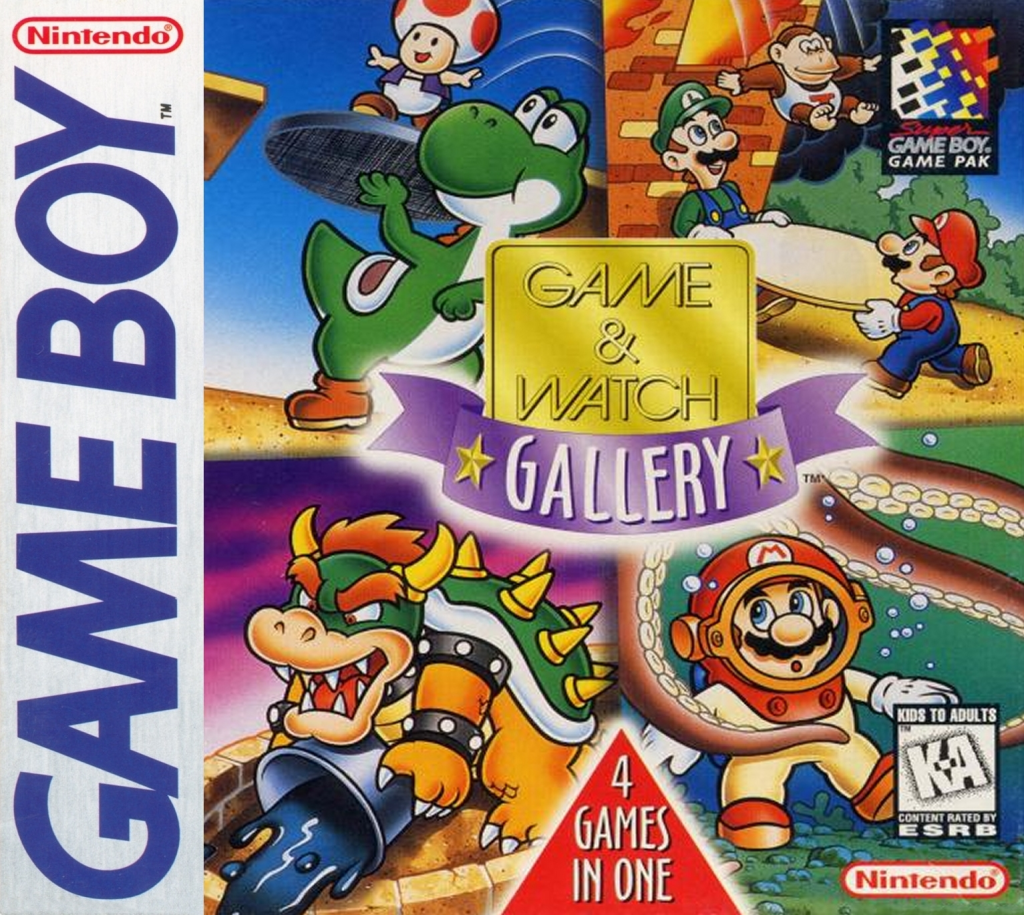 Game & Watch Gallery is the first game in a delightful series which sees Game & Watch titles remade in ways which incorporate different characters like, Mario, Donkey Kong and Yoshi. I personally adore every installment and consider it one of the best ways to experience Game & Watch games. Not only do you get the remakes, but you also get recreations of the originals, so there’s no chance that you’ll miss out on anything. This first collection, sadly only includes four games, but it’s still very good and they’re all great fun to replay frequently to try and beat your high scores. What I’ll do is link to my reviews of the original games and then review each of the remakes.

Manhole (original review)
The original game had you playing as a regular person who had a single manhole cover and had to switch between four open manholes in order to stop people falling in as they walked by. In this version of the game, you play as Yoshi, who sits in the middle of the screen and uses his hands and long tongue to keep four separate manhole covers up. In this one, the manhole covers fall down after somebody walks over them and it’s you’re job to either hold them in place as people walk by or to put the covers back up after they fall down. It’s much more enjoyable over the original, as it’s a lot easier, the gameplay never feels slow and you have Mario, Toad and Donkey Kong Jr. filling the roles of the people who pass by.

Fire (original review)
Instead of playing as fireman helping people fleeing from a burning apartment building, you play as Mario and Luigi, who are helping out after what looks like Princess Peach’s castle has caught fire. Yoshis, Toads and various duplicates of Donkey Kong Jr. all jump from the building and Mario and Luigi must use a trampoline to bounce them into a nearby carriage. I have to admit that it bugs me a bit to see Donkey Kong Jr. used as if he is a generic Mushroom Kingdom species and not an individual (and Manhole does it slightly too) but this is still very fun. The different characters fall at different speeds and bounce to different heights, but other than that this isn’t all that much different to the original. Thankfully, the original is really good and I enjoy it even more with a splash of Super Mario paint. One thing I should point out is that if you play the original, a new animation has been added of people storming away after they hit the floor. Originally, you just got a picture of an angle near the top of the screen to indicate they had died, but I guess Nintendo wanted it to be more family friendly for this rerelease.

Octopus (original review)
In this game, Mario and Peach have sailed out in search of treasure (replacing the generic divers of the original.) You basically have to move around under the water to collect as much treasure as possible and bring it back up to the ship, while avoiding the dangerous reach of the octopus’s tentacles. It’s not too much different to the original, but it provides you with one disadvantage and one perk. The disadvantage is that the more treasure Mario takes, the slower he becomes, but the perk is that he can throw the treasure at the octopus to temporarily stun it. Of the four Game & Watch titles remade in this collection, this one is probably my least favourite, but I still have fun with it.

Oil Panic (original review)
Oil Panic has always seemed a little strange to me. I never really understood the scenario which was taking place and I don’t really understand it in the remake either. Mario is inside one of Bowser’s castles and there are a few fires on the ground. Oil drips through the ceiling and Mario needs to catch it in a bucket (he has one in each hand) to stop it hitting the floor. Bowser is standing on the roof and I don’t know he’s causing the oil to drip through the ceiling or what, but he is holding a bucket so I think he is supposed to be. Once the buckets are full, Mario needs to dispose of the oil and he does this by tossing it out of the window for Yoshi to eat. Yes, apparently Yoshi eats oil. He must feel kind of weird about it, since he is a dinosaur. But if Yoshi’s not there, you’ll toss the oil onto either Luigi or Donkey Kong Jr. who are just sitting around and minding their own business outside. This will lose you a life, just like if the oil touches the floor. Having two buckets (rather than one) makes the game much more enjoyable and easier. As does the ability to turn around and catch things in different buckets. Two huge improvements over the original.

Overall, this a game I enjoy very much and it would surely make a pleasant addition to the collection of any Nintendo fan. These games are all highly addictive and beating your old high scores can be very satisfying. There is a small gallery of Game & Watches to fill and you get rewarded with them for getting certain high scores in the game, which is a further incentive to replay, if one were needed.

These remakes all improve over the original in small or big ways, but even if you’d rather play the originals first, that option is available to you, since they are all included. As it can be downloaded so cheaply these days, it’s well worth a try.