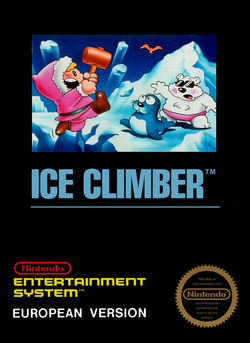 For years Ice Climber was nothing but a forgotten NES title, but that all changed in 2001 when Super Smash Bros. Melee came out and featured it’s protagonists, Nana and Popo, as playable characters (known together as Ice Climbers). At the time, I was quite a big Nintendo fan (though not as big a fan as I am today) but I had no idea who those two were and so through their inclusion I discovered Ice Climber. Surely, I thought to myself, this must be one of the truly great titles of the past, to have been honoured so greatly in the Super Smash Bros. series.

Nope. Ice Climber is actually really boring. It has not aged well and is probably one of the worst games I’ve ever played. If you’re doing single player, you play as Popo as he climbs up thirty-two different ‘mountains’. Let me tell you about the mountains Popo climbs; basically, they’re nothing like mountains. You will be on the ground and above you is a platform made up of little blocks. Each time you jump into one of the blocks which make up the platform above you, they break off and you have to make a hole for you to jump through and get on to the next platform. At the end of each stage there is a bonus area where you try to retrieve food stolen from you by a condor. It’s a little hard to explain, but I hope that’s clear.

Additional hazards include yeti creatures called Topi which will kill you if they touch you and replace blocks that you’ve destroyed, Nitpickers (bird enemies from Donkey Kong Jr. strangely) and some sunglasses wearing polar bears who jump and make the screen scroll upward. To make things harder, the screen can only scroll up, so if you go high enough that the lower platforms are no longer visible, then you’ll die if you fall off the screen, even if you would have landed on them.

I realise this probably sounds a little basic, but not necessarily bad. Well, there’s one thing I’ve not mentioned; Popo jumps terribly. So often it will feel like you should have landed on a platform only for him to pass through it or to come straight down after hitting his head on a block he should have missed. You press A, Popo jumps, he either goes slightly to the right, slightly to the left, or straight up and, otherwise, you have no control over him. As this will often lead to him falling off the screen (and therefore dying) it can be extremely frustrating. That’s not to mention that your only form of defence against the enemies is a hammer which you can swing forward; Nitpickers are often quite tricky to hit with this, since they’re so much more mobile than you.

The combination of poor controls, bland and repetitive level designs and boring, droning ‘music’ make this game a very poor experience. A minor plus is that the two player mode allows two people to play simultaneously, which is unusual for NES games of this time and quite a pleasant surprise; sadly, it won’t last for long because one or both of the players will quickly run out of lives. Other than being a mild curiosity from the history of Nintendo, I can’t say much that’s good about it. Perhaps one that’s only for the huge Nintendo fans.