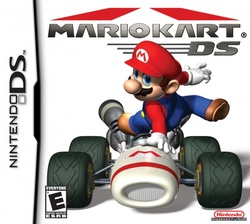 I was always fond of the Mario Kart games, but it was with Mario Kart DS that the series, in my eyes, changed from being quite fun to being a real Nintendo classic. To do this day, this is a very enjoyable game.

In terms of characters, some people might be disappointed after Double Dash!! because you start with the usual eight (Mario, Luigi, Peach, Yoshi, Toad, Wario, Bowser, Donkey Kong) and then there are only four unlockables (two brand new, two featured before), making the total substantially lower. But while it may be a little lacking when it comes to characters, it is superb in every other sense.

The selection of race tracks in Mario Kart DS is one of the best that has ever been offered. There are four new race cups (made up of four tracks each) providing sixteen new tracks which include an excellent Luigi’s Mansion track, a cool Super Mario Bros. 3 style desert, a Tick Tock Clock level and one of the best iterations of Bowser’s Castle (amongst many others). On top of this, you have an additional sixteen tracks which return from the previous four games and which I was very pleased with. Returning tracks include Frappe Snowland (from Mario Kart 64), Sky Garden (from Mario Kart: Super Circuit) and Mario Circuit 1 (from Super Mario Kart) to list three of my favourites.

The multiplayer experience is especially good this time too. This was the first Nintendo game to provide online play and while you could only race with three online racers at once, it was very exciting. Plus, as long as they had their own DS, you could play with up to eight people with only one copy of the game (although it was only on a limited number of tracks). When you all have copies of the game, you can use all the tracks and it’s a load of fun.

So on the whole, this is an excellent game and one of the best Mario Kart titles. The controls feel pretty airtight and the CPU racers never feel like they are obnoxiously cheating (which is a problem with certain past titles). Plus, for the first time, there are “Missions” which have you fighting against several bosses (from Super Mario 64 DS) while riding around in the karts. Add to that the fact that battle mode can now be played with only one human player and you have a very substantial game on your hands.