Mario vs. Donkey Kong 2: March of the Minis 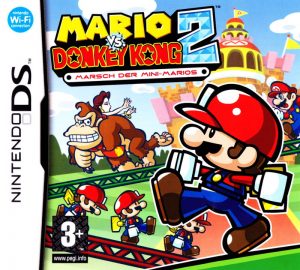 I had somewhat enjoyed Mario vs. Donkey Kong on the Game Boy Advance and I remember being quite excited when I heard that it was getting a sequel for the Nintendo DS. I was curious to see how they’d improve the formula on superior hardware.

As it turns out, they did not improve the formula. They didn’t worsen it, either. They actually just made something completely different. While the first game had been a sort of successor to Donkey Kong for the original Game Boy, this game had you guiding Mini-Mario toys to the exits of little 2D levels. On paper, it might sound like a change for the worse (and I know some people were unhappy with it) but I actually like it more than those previous two games.

The Mini-Marios actually made their debut in the previous game, but I found them quite annoying in that one, since you just had to lead them to safety with Mario and they often died because of things which felt like they were out of your control. This time, you do feel in control. You can turn the Mini-Marios on and off by tapping them and swipe them left or right to make them go in certain directions. Along the way, they’ll encounter Shy Guys, Piranha Plants and other enemies trying to destroy them. They can’t really defend themselves (unless you lead them to a hammer) so you need to keep an eye on all of them to keep them safe.

Winning a level feels very satisfying and it’s one of those DS games which made good use of the touch screen controls. It wouldn’t really work without them. You go through several worlds along the way and they’re all styled after famous Mushroom Kingdom locations (and one is styled on Donkey Kong Island.) Very nicely, you get remixes of famous Super Mario and Donkey Kong tunes along the way (though I wish they had more Donkey Kong music…)

I also appreciate this game from a story perspective too, which I can’t really say for its prequel.  It starts with Mario opening a theme park based around Mini-Marios and he has Pauline there as a special guest. For the first time, she has a 3D model and it’s pretty cool that they brought this retro character back after all those years. Donkey Kong gets mad when she favours a Mini-Mario over a Mini-Donkey Kong, grabs her by the arm and drags her away. Cue Mini-Mario based chase. There’s a wonderful twist ending to it all and I shan’t spoil it, but let’s just say that I enjoyed Donkey Kong’s characterisation here.

It’s a nice, simple game and it doesn’t have too many problems. I will admit though that one or two of the game’s levels were on the frustrating side and, to be honest, the concept as a whole might not be “meaty” enough for some players. Plus, I do wish that they had incorporated more elements from the Donkey Kong series – other than Pauline and DK himself, it feels more like a Super Mario game which just happens to feature Donkey Kong, rather than a merging of the two series.

Nonetheless, it is an enjoyable puzzle game and something which I would recommend adding to your DS collection.