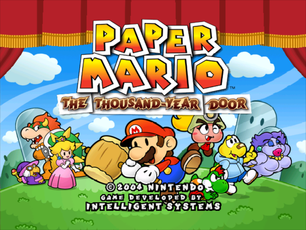 This game is the second in the Paper Mario series. But aside from a few small references to the first this game is pretty much entirely standalone, so, you needn’t worry if you want to start the series here.

One thing I love about this game is the storyline; Peach and Toadsworth go away and have a holiday at a place called Rogueport. While there, Peach finds a mysterious treasure map and then sends it to Mario along with a letter inviting him to come and join her there. When Mario arrives, he finds that Peach has mysteriously disappeared. He then meets a young Goomba girl named Goombella and finds out that the treasure map he has shows the location of various crystal stars which must be found in order to access a mysterious ancient treasure beneath the city. Bowser finds out that Peach has gone missing too, and so also heads to Rogueport in order to try and find her himself. As with the first game, Mario comes across a whole range of strange and loveable characters along the way, too. Luigi also has his own off-screen adventure, which you can find out about by chatting with him.

Gameplay-wise, the lovely mixture of platforming and RPG gaming is the same as it was in the first, though there are some minor changes. Mario’s various partners now have their own health gauge like Mario does, which is good, I think. Mario also gets some new power-ups, ones which make use of him being made out of paper; he can, for example, be folded into a paper aeroplane in order to cross chasms or turn sideways so he can fit through paper thin gaps. The segments where you play as Peach return as well, though, sadly, they aren’t quite as good as the ones in the first game, though this is only instance where this falls short of its prequel. One thing I absolutely loved was the fact that you get to play as Bowser from time to time too, either as he explores the areas Mario has already visited or in some fantastic side-scrolling levels made to imitate the style of the original Super Mario Bros..

On the whole, this game comes close to being the best Mario game ever made; there’s a lovely immersive world to explore, a large cast of excellent characters and a wonderfully dark storyline. The only real downside is that the game seems quite limited in terms of story by being ‘for kids’. I don’t want to spoil anything, but there are several times when something pretty dark happens and then later on it basically says “Don’t worry! Nothing bad really happened” which detracted from it somewhat, I felt.