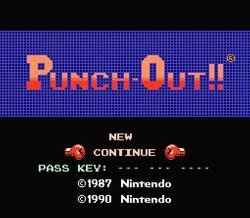 Back in the early days of their video game creations Nintendo made a couple of boxing games for arcades. These boxing games were called Punch-Out!! and Super Punch-Out!! and they had you fighting against all kinds of comedic and strange opponents. Eventually, the time came for Punch-Out!! to make the transition to consoles, but rather than being a near identical recreation, like Donkey Kong, the NES Punch-Out!! was a unique experience distinct from its arcade predecessors.

In the game you play as Little Mac, a young and upcoming boxer who is much smaller than the other boxers he comes up against. Mac stands face to face with the rival fighters and you can punch upward, punch at stomach level, duck, block, dodge to the left or dodge to the right. It might not sound like you have much control over Mac, but this actually gives every fight a rather satisfying strategic feel. Every enemy boxer has his own fight pattern and as you go on you begin to identify them and figure out what exactly you need to do in order to respond to everything your opponent does. In some ways, it reminded me of learning a complex dance.

Every boxer is very memorable and many are quite funny. My personal favourite was one called King Hippo, who I thought looked hilarious. The problem is that each of the boxers is of a different nationality and the game always relies on some form of racial stereotypes. I found this a little uncomfortable at times and I am sure you may do as well. Nonetheless, I still found one or two of them rather loveable, like the aforementioned King Hippo. Also, on the subject of characters, Mario appears as the referee for every fight, which is nice. I just wanted to mention that somewhere.

I’m sure most people who play this game today will just download it from Nintendo’s eShop, but if you’re going for the original NES edition, you’ll find out that there are two distinct versions of this game. How are they distinct? Well, no more so than Pokémon games having a different legendary Pokémon at the end; the original version of the game is Mike Tyson’s Punch Out!! and, at the end, Little Mac faces off against Mike Tyson. Nintendo later lost the rights to use him and released the game simply as Punch-Out!! with a different final boxer, but the original version with Mike Tyson will likely be an interesting curiosity to some fans!

Overall I liked this game quite a lot and enjoyed how different it was to the average fighting game. I must warn you, however, that the game becomes extremely difficult towards the end and I have to admit to making unfair use of save states in the final couple of fights! Nonetheless, there is a lot to be enjoyed about Punch-Out!!.