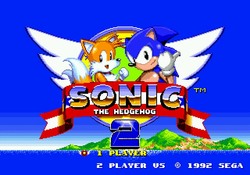 This game is the sequel to the original Sonic the Hedgehog game. I have to say, I didn’t really like the first game and so I was quite cautious going into the second; I wasn’t expecting much and I just hoped it wouldn’t be too bad.

It turns out that I actually enjoyed this game! Though in many ways it’s very similar to the first, the formula has been refined to such an extent that it is no longer bad. Most importantly, it felt a lot fairer.

Story-wise, Eggman has been up to his old tricks again and has encased lots of innocent creatures inside evil robots. In this one he’s also building some kind of space station too. Sonic doesn’t head out to stop Eggman by himself this time, instead he travels with his friend Miles ‘Tails’ Prower, the two-tailed fox who would go on to become one of the main characters in the series. Tails is pretty cool and you can choose to be him or Sonic as you play through (though it is mainly just an aesthetic change).

But it’s in terms of gameplay that I was most pleased with this game. The idea of Sonic is that he can run fast and the level designs in this game actually allow for this kind of gameplay; there are no cheap traps or hazards which make you have to go slow for ages. I’ll admit, not every level is about running, but some of them are. There’s a good amount of variation and the levels stay fun. Mystic Caves was my favourite level, a really nice ‘spooky’ location which had a great atmosphere and was lots of fun to play through. Other highlights include Aquatic Ruins and Oil Ocean. The last couple of levels are pretty tough, but I suppose I can forgive that since they come at the end.

This game also introduces multiplayer options: you can either do a two-player race (one person Sonic, the other Tails) which is okay, but a bit bland, or you can play through the story co-operatively! Whenever you start playing single player mode, Tails will be CPU controlled, but at any time a second player can pick up a controller and play as Tails! The screen follows only Sonic, so Tails can get left behind, but he also cannot die, which means he is perfect to use for exploring!

On the whole a very enjoyable experience, if a little short. It’s exactly what the first game should have been, and if you’re looking for an introduction to retro Sonic games, go for this one over that.