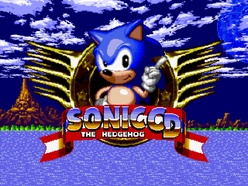 The unique selling point of this game, and the reason that it has “CD” in the title is that it was originally released on a CD-ROM (rather than a cartridge) which made it possible to include a higher quality soundtrack. I was quite pleased with the music used in the game; it was often very good and helped to make the game generally more enjoyable. It’s worth keeping in mind that there are two different soundtracks for the game: one for the American version and one for everywhere else.

The storyline is slightly more complicated this time and it also introduces a couple of things which would go on to be quite important to the series as a whole. One of the main villains of the game is Metal Sonic, a robotic version of Sonic created by Dr. Eggman who has since appeared many times and we are also introduced to Amy Rose (she gets kidnapped by Metal Sonic) and Amy later appears in basically every Sonic game. The whole game takes place on “Little Planet” where Eggman is building robots and highly technological cities for himself; you need to stop this, and you are occasionally able to travel into the future where you can see how things will change… There are good futures and bad futures based on your actions. There’s also quite a cool animated opening cut scene.

Gameplay is the same as it had been in previous entries; you go through a series of side scrolling stages, fighting Eggman’s robots on the way and fighting bosses every now and then. I felt like the level of difficulty was just right this time, with the bits that were hard being hard for fair reasons and everything feeling very reasonable. I actually also have to say that some of the levels are just plain cool (especially one of the boss fights) which is good, since I know that’s what the Sonic series is ultimately aiming for.

On the whole, this is definitely one of the best 2D Sonic games. The gameplay and level design are spot on and while the story might be a little confusing, it’s not really that important to the overall enjoyment of the game. The only real downside of Sonic the Hedgehog CD is that it feels pretty short.