Harry Potter and the Prisoner of Azkaban by J. K. Rowling 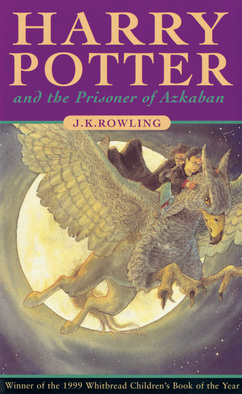 As per the last two books, it started with Harry getting on with his unhappy life living with the Dursley family and looking forward to the start of the next school year to start so that he can return to Hogwarts.There’s also news of an insane mass murderer on the loose too… One thing I have to say about the opening is that I instantly felt that the book had a much darker tone to it than the previous two books – the first two chapters felt more like a surreal horror novel than the lighthearted fantasy that the first two had been.

Once again several new characters are introduced and I was especially impressed with both Professor Lupin and Sirius Black. But it’s not just the new characters I was excited by: the existing ones are taken in quite interesting directions. We really do get a glimpse of the dark side of Harry in this book and I don’t want to spoil anything, but there’s some added tension between the main group.

It’s a little hard to talk about the overall story without spoiling anything, but the general story is much more interesting and clever than what happened n the previous two books. There are a lot of revelations about previously established fact about the Harry Potter world and I found them all very exciting.  In fact, many of the things revealed in this book are quite sad and emotional, which is a definite strength.

I feel like the first two book were both very good and this one was superb. Obviously I’m not going to tell you how it ends, but it was deeply satisfying. For the last five chapters or so, I simply couldn’t put the book down. You should definitely read this if you enjoyed the first two . I hope the trend of getting a little better each book will continue as the series goes on…