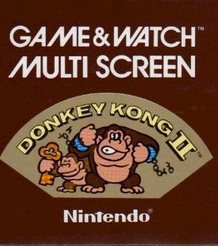 When people think of the original Donkey Kong trilogy, they probably think it goes: Donkey Kong, Donkey Kong Jr., Donkey Kong 3 but they’d be wrong because, what a lot of people don’t know is, there is actually a Donkey Kong II. This game was a Game & Watch exclusive, there was never an arcade or NES version, and this probably is a big part of why it’s been mostly forgotten. But, I have to say, this is probably my favourite Donkey Kong Game & Watch game.

Story-wise, it seems to be a repeat of Donkey Kong Jr.; Mario has kidnapped Donkey Kong (that man seems to have a nasty habit of doing that!) and so Donkey Kong Jr. sets out to rescue him. I guess a slight difference is that, this time, rather than putting DK in a cage, he held him in place with chains (one on each limb).

The game takes place across two screens, which is quite nice. You have to get Donkey Kong Jr. up to the top of the trees where Donkey Kong is held, tossing keys up along the way so that you can unlock the four padlocks which are keeping him trapped. What I quite like is the fact that you have to go through the level in both directions (both up and down) as it makes a nice change from the other early games in the series. There’s also a nice mixture of nature and technology, with electrical cables mixed in with the branches of the tree, and I find that quite cool. At times the difficulty does feel a bit unfair though, as there are so many enemies that it seems like there’s nothing you can possibly do to avoid them.

A controversial opinion, I’m sure, but this is actually my joint favourite of the early Donkey Kong games. The gameplay feels fast, it’s fun to replay and the graphics don’t look bad. What’s especially impressive is that it achieves all that as a Game & Watch title. Rating: 6/10