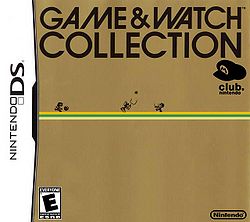 Game & Watch Collection is a rather rare game for the Nintendo DS which brings together three classic Game & Watch games. The reason it’s so rare is because it’s something that was made available exclusively through Club Nintendo, which a lot of people did not use. It brings together Oil Panic, Donkey Kong and Green House which were all double screen systems, meaning they all transfer well to the DS. So what are those games like?

Oil Panic
This one has you at the top of a petrol station and catching oil in a drum so that it won’t fall on the ground and catch fire. These drums can only hold so much though and you have to pour them out of the side of the building once they fill up, making sure to pass it onto your helper and not one of the customers below! It’s a bit of a weird situation, to be honest and actually not as fun as the other two games in this collection. (Read the full review here.)

Donkey Kong
This is very interesting from a historical perspective as it is a Game & Watch version of the original Donkey Kong. Donkey Kong has kidnapped Pauline and Mario is setting out to rescue her. It’s fairly fun, but it gets repetitive quite quickly and can actually be quite tricky. It’s nice to see it’s rather urban setting though. (Read the full review here.)

Green House
This is my favourite Game & Watch! You play as a character who is presumably Stanley the Bugman of Donkey Kong 3 fame (but who may also be Mr. Game & Watch or a random fumigator) and you just have to quickly squirt bugs with a bug spray gun to stop them from killing your flowers. Very fun, simple and hugely addictive. (Read the full review here.)

Other than buying these original Game & Watches themselves, this is probably the best way to play these games – the DS’s two screens mirror their original ideas entirely. It’s sad that you only get three games in this collection and it feels like you should really have a lot more. So keep in mind that this is a very basic game, but it’s still good.