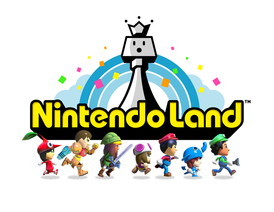 Nintendo Land was one of the first games released for the Wii U and seems to have been designed to show off what the system can do. Not only do I think it was a good way to demonstrate the Wii U’s capabilities, but I also think it’s a pretty good game in its own right.

In it, your Mii meets a mysterious computer woman named Monita and she creates Nintendo Land as a place for you to have fun. Nintendo Land is a kind of theme park and there are twelve attractions for you to try out, each one based on a different Nintendo franchise. While they are called ‘attractions’ each one of them is actually just a new game based on each franchise where you play as your Mii. I liked them all very much and I shall go over them one at a time.

The Legend of Zelda: Battle Quest
This one was one of my favourites; your Mii dresses as Link and they make their way through Hyrule, solving small puzzles and fighting various enemies and bosses along the way. The whole game has this kind of patch-work aesthetic, but I think it looks the nicest in these recreations of various locations from the Zelda series. I was always excited to see how the familiar settings would look when encountering them again in this game. Your Mii moves forward through the levels automatically, but you control either their sword or their bow and arrow (depending on whether you use a Wii Remote or a GamePad as your controller). You might think that it might not be so fun, being unable to decide where your Mii goes, but I still had a pretty good time with this. There are a fair few levels to go through, and despite having next to no story, there’s a clear sense of progression as you go on. You can also do this on multiplayer mode and it is exactly the same, but different characters can have different weapons, you have to look out for each other, and so on.

Metroid Blast
Again, this one was one of my favourites. Your Mii dresses as Samus and you go on various missions (set in a variety of levels) where you have to fulfil certain criteria (usually defeating enemies within a time limit). You can choose to play on-foot or you can fly inside Samus’s ship and, unlike the Zelda game, you are free to move around wherever you want. There’re quite a large number of levels, and I always found it fun to fly around in Samus’s ship. At times I found it to be pretty difficult too. This attraction also features some multiplayer options and you can either choose to fight with your friends in the large levels, or work together to win the missions.

Pikmin Adventure
This is something which, I’m sure, will make Pikmin fans very happy. Your Mii dresses as Captain Olimar and is in charge of number of Pikmin. You have to get through various levels, in order to get back to your space ship, fighting monsters and solving puzzles along the way. This is pretty much a brand new Pikmin game, albeit slightly watered down. This was another of the attractions which I thought looked very nice and once more I was excited to see how things would look in the Nintendo Land aesthetic. What annoyed me about Pikmin Adventure, however, was that there were a fair few timed levels which were awfully hard and not all that fun either. Like Metroid Blast you can also play cooperatively with your friends, or fight against one another.

Mario Chase
Something which is bound to annoy people about this attraction is that it is multiplayer only. One person plays as their Mii dressed as Mario and up to four other players have their Miis dressed as Toads and it’s basically a game of hide and seek/tag. You all start in the centre of one of several maps and the player who is dressed as Mario is given a head start to run away, and then afterward the Toad Miis come after him and they win if they catch him (while the Mario Mii wins if it remains uncaptured). I’m in two minds about this attraction; on the one hand, it is very basic and there are only three maps to play on, but on the other hand it can be very fun. It’s a nice use of the GamePad too, since the location of the Mario Mii stays secret because that player only uses the GamePad screen while the others use the television.

Luigi’s Ghost Mansion
This game is like a more complex version of Mario Chase and, again, is only made available in multiplayer mode. There are several levels set inside a haunted house and the player using the GamePad has their Mii assume the role of a ghost, while the others dress as Luigi and hunt for it. The ghost Mii is invisible to the Luigi Miis and if it grabs them, they will faint, the Luigi Miis, meanwhile, have torches (with a limited power supply) and can harm the ghost Mii by shining light on it. There’s more to it than there is to Mario Chase but it fails to capture the same feeling of frantic excitement that that attraction gave me.

Animal Crossing: Sweet Day
As much as I love the Animal Crossing series, this one, sadly, was probably my least favourite attraction. It’s another multiplayer-only game, similar to Mario Chase and Luigi’s Ghost Mansion but the problem is that the game doesn’t feel very balanced. One to four players have their Mii dress up as one of several villagers from the Animal Crossing series and have to run around the map eating as many sweets as possible, the other player has their Mii duplicated as both of the town guards and has to catch the sweet eaters. For some reason, it just feels far too hard to ever catch anyone as the guards, so I don’t tend to play this one very often.

Takamaru’s Ninja Castle
This attraction is actually based off of the obscure, 1986, Japan-only game The Mysterious Murasame Castle and I quite like that such an unknown title was brought into the spotlight. In this one, your Mii dresses as the star of that game, Takamaru, and goes through several levels fighting off enemies with shuriken. Ninjas pop out from all over the place and you use the GamePad to aim the shuriken, which is quite a lot of fun. If you played the original game and always considered it a favourite, I expect that you’ll be very happy with this attraction and, if you’ve never heard of it before, I expect that you’ll still like it. It’s got a lovely soundtrack and the gameplay, while simple, is fun and addictive.

Donkey Kong’s Crash Course
Based specifically on the original Donkey Kong, this attraction has your Mii transformed into a spring-based contraption with wheels. You have to get through several ‘crash courses’ which are all based on the kind of levels from the first Donkey Kong game and to do this, you have to tilt your GamePad so that your Mii, in its new wheelie form, will roll in the correct direction. It’s another simple idea, but that doesn’t change the fact that it is very fun. There’s a great deal of skill involved in this game, and once you figure out how to get passed a certain obstacle you’ll be very pleased with yourself.

Captain Falcon’s Twister Race
This attraction, based on the F-Zero series, was another that I wasn’t all that fond of. Your Mii dresses as Captain Falcon and gets into his super-fast futuristic racing car, the Blue Falcon. But, really, all this is is watching the car drive along from a top-down perspective while using the GamePad as a kind of steering wheel. Gets pretty hard at times too.

Balloon Trip Breeze
This was a pretty good one based, as you may have guessed, on Balloon Fight. If you have played Balloon Fight you will be familiar with its “Balloon Trip” mode and Balloon Trip Spring Breeze is a remake of that, and, I might add, the best iteration of it I have played to date. Your Mii dresses up as a Balloon Fighter and sets out on a journey across the ocean, using the balloons attached to its back to fly. The music that plays is really peaceful and beautiful and even after you’ve lost, you’ll want to start again just to try and go a bit further the next time.

Yoshi’s Fruit Cart
This is another one which takes a rather simple idea (which makes good use of the GamePad) and makes it very fun. Your Mii rides on the back of a wooden Yoshi with wheels and on the television screen you can see several fruits that need to be eaten and an exit gate. You have to use the GamePad to draw a route so that the wooden Yoshi can eat all of the fruit and then get to the exit, but the twist is, that all of the fruits are invisible on the GamePad screen, meaning you’ll have to put your understanding of space and distance to the test! Very fun, but occasionally a little hard.

Octopus Dance
This attraction pays tribute to the Game & Watch titles and, more specifically, is based on the game Octopus. What’s strange is that, while Octopus had you diving into ship wrecks under the sea to collect treasure and avoiding the eponymous octopus, this game has that octopus acting as a dance judge… Odd. Still, I find this game quite fun. The diver from the original game does a certain dance, and then you have to press the right buttons so that your Mii will do that dance too. A lot of people don’t like this one, but I found it fun enough, and getting a dance right with no mistakes is pretty satisfying.

So, that’s all twelve of them, and this might just be the longest video game review I’ve written so far. As you can see, the games are not all equal; some are pretty comprehensive, whereas others are quite basic. Overall, it’s a fun game, and if you know a lot about Nintendo, you’ll appreciate all the little references to the older games, and if you don’t know a lot about Nintendo you will be able to enjoy it simply as a fun game. There are unlockable statues of all the items and creatures in the game, which are purchased (through a coin drop game) with money made in the attractions, which encourages replay too. All in all, I game I would recommend.
Rating: 8.7/10