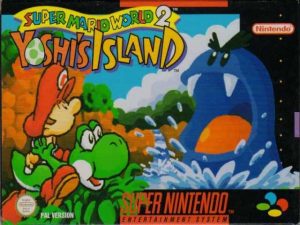 After his introduction in Super Mario World, Yoshi had proven to be very popular. Nonetheless, I still find it quite surprising that he was the one to take centre stage in its sequel Super Mario World 2: Yoshi’s Island, which I consider to be one of the most experimental instalments in the mainline Super Mario series.

While most of the games had pretty much been a case of Bowser causing trouble, kidnapping Peach and having Mario and Luigi stop him (discounting Super Mario Bros. 2) this game actually gives us a flashback to a very early stage in their lives. It starts with a stork carrying a baby Mario and Luigi in a bundle through the clouds, only for it to be attacked by a mysterious figure who takes one of the babies (Luigi) and causes the other to fall from the stork’s grasp and down onto Yoshi’s Island far below. The Yoshis then find the baby and work together to try and get him home and rescue his brother.

I know I musn’t spend too much time talking about story when it comes to a game like this (since it isn’t overly important to most people) but the game seems to give a significant retcon in what we understand of Mario’s life. The earlier games had seemed to show him in a fairly “real world” setting, with him then passing into the Mushroom Kingdom in Mario Bros. but this shows him in the Mushroom Kingdom at the very beginning of his life. It’s hard to reconcile these two origins, but I guess, maybe, he was born in the Mushroom World, then moved to Earth at a very young age, then returned to the Mushroom Kingdom, not remembering the distant past.

So, anyway, onto something of more relevance: the gameplay! You play as Yoshi and you have Baby Mario riding on your back. Yoshi can eat his enemies, use a “flutter jump” to get up extra high and lay eggs which can be used as projectiles. He’s fun to play as and he also cannot be defeated just by being hit by enemies – but the thing is, if he gets hit, Baby Mario will fall off his back and get trapped in a bubble. Yoshi then needs to retrieve him before enemy Toadies come along and steal him away. It creates a very different dynamic to the other games in the series. Egg throwing also creates lots of new types of puzzle.

What also sets this apart from the other games in the series, is that everything is designed with a sort of hand-drawn aesthetic. There are lots of bright, vibrant colours and it looks as if it could have been sketched with crayons. It’s a nice look and there’s a particularly good soundtrack to accompany it. In terms of presentation, I feel the game does really well.

While in previous games, you’d face Koopas, Goombas, Thwomps and several other enemies that you’d come to expect by now, this game introduces several new enemies, such as the Ukikis and Raphael the Raven. They really tried hard to give this game its own unique identity – which is quite fitting, because it is essentially the first instalment in Yoshi’s own spin-off franchise.

It also introduces some bizarre new elements, like Yoshi’s ability to transform into a helicopter. It makes no real sense and is given no real explanation, but when it does happen, it changes up the gameplay in nice ways and I find it quite funny too. Other nice little bits include times when Baby Mario runs free without Yoshi.

It’s a good game all round and with a fair amount of replayability too (since there are lots of hidden collectables in each level.) I guess sometimes the game can be a little frustrating difficulty-wise and I do wish that it had had a map screen like the last Super Mario World game. But, overall, it’s a good experience (and without spoiling it, it has a great final boss too.) A good start for Yoshi’s own platforming series.